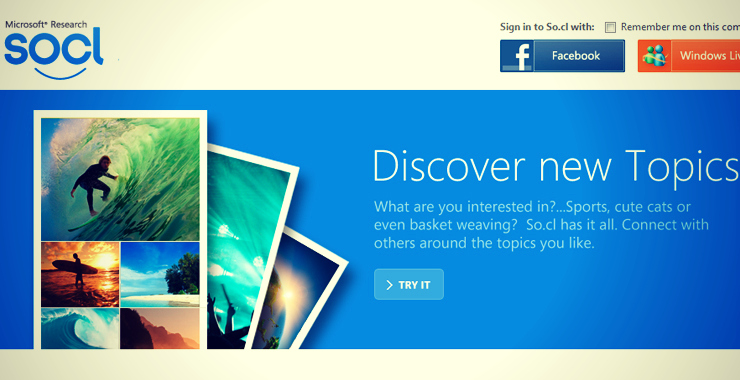 In 2011, Microsoft announced the long awaited launch of their social network, after months of speculation about how the Microsoft Research team would create their hybrid of search, discovery and social networking, but the network was launched as a product for the academic world, limited to students and teachers.

It turns out that the academic world was simply a testing ground for Microsoft’s social network, So.cl which has now come out of beta and is available for use by the general public as the company seeks to focus on information and the ability to share search results and streamline results so that with a few clicks, pictures and information is added to a So.cl status post.

What was previously less emphasized but now appears to be a major component of the social network is So.cl’s “video party” feature which allows users to watch videos simultaneously together from remote locations.

A Microsoft representative said in a statement that “So.cl is an experimental research project focused on the future of social experiences and learning, especially among younger people,” and is a product of Microsoft’s FUSE Labs.

Timing and relevance of launch

Some question the timing of the launch as the company remains an investor in Facebook, the social network that just went public. Writers are stating that So.cl is like Facebook and Twitter, but the company asserts that the product is not a competitor as the experimental design is much more focused on information, learning, discovering and sharing, much like one would in the academic world.

The company tells users to connect with like minds over topics relevant to them, and says that “you can share your search and express your ideas through beautiful collages of content.”

So.cl will likely garner attention from early adopters, and with Microsoft’s FUSE team behind this project, it is like to evolve as user behavior dictates it should.