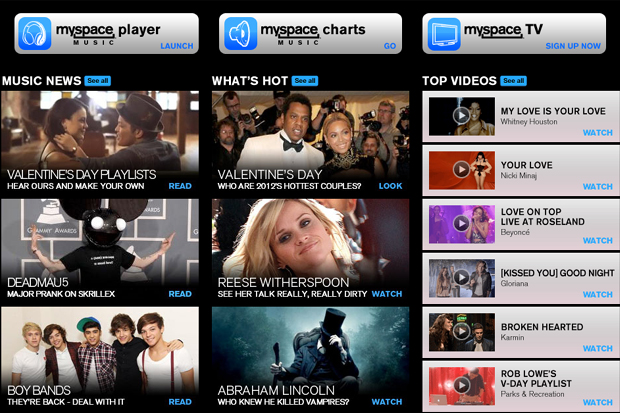 Could MySpace be coming back?

After being declared dead, several factors have come into play that has MySpace poised for a comeback – but it a different form. Nevermore will the site be a social networking hub akin to Facebook, but the network will remain social. In 2005, Rupert Murdoch purchased the site for $580 million, only to watch it decline over the years as competition squashed the site, leaving it in shambles, allowing Justin Timberlake to buy the network for only $35 million.

Now, the company is saying that they have had a recent surge and is now gaining more users than it is losing, having signed up one million users in the past two months.

Why the comeback and in what form?

According to The New York Times, the MySpace Music Player, which provides free music, is a top component for the company’s growth, but according to Forbes, Chris Vanderhook, MySpace’s COO, credits it largely to “integration with Facebook and Twitter.”

Facebook is seen as MySpace’s final nail in the coffin, but in an ironic twist, it is among the site’s saving graces now, but the two no longer are competitive with each other as MySpace is now a music destination (which many argue it should have pivoted towards in roughly 2007).

The music library on MySpace is substantially larger than their competitors’ but with Napster founder Sean Parker at Facebook, the final outcome of who will rise, fall and boost each other in this small music tech scene remains unseen. MySpace is no longer a social network to promote yourself on unless you are in music, but it is growing in size and poised for a comeback in a new form.