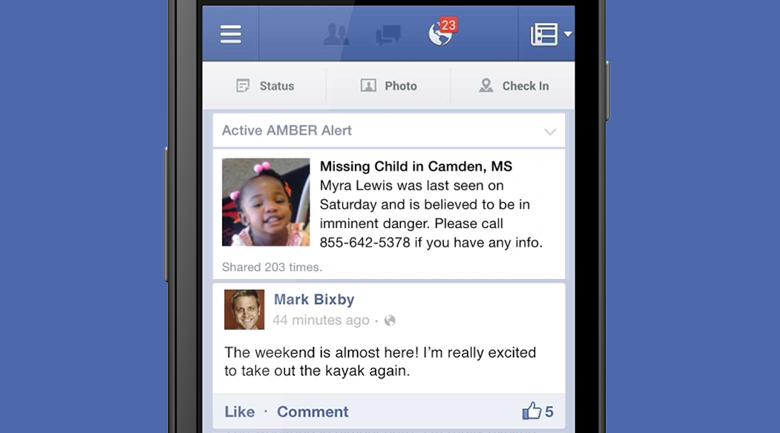 Facebook adds non-invasive Amber alerts, look out for them

With 185 million users worldwide, Facebook is a great way to spread the word about everything from relevant news to your upcoming birthday party. Now, thanks to a collaboration with the National Center for Missing and Exploited Children (NCMEC), the Facebook network may be used to help find and rescue missing children and reunite them with their families. The Center has begun posting Amber Alerts on the Facebook newsfeed.

The Amber Alert program is named in honor of Amber Hagerman, a nine year old who was kidnapped and murdered in Arlington, Texas. AMBER also stands for America’s Missing: Broadcast Emergency Response.

Since 1996, Amber Alerts have been used spread the word far and wide when a child goes missing, and has so far resulted in 728 children being rescued.

In the past, Amber Alerts have spread via telephone and billboards. A collaboration with one of the world’s biggest online networks seems like a no-brainer.

Facebook’s trust and safety manager, Emily Vacher, points out that Facebook has already facilitated happy reunions when families have used the site to spread the word within their own communities about a missing child. With Amber Alerts on Facebook, families will be able to reach even more viewers who might have information about the child. The Amber Alert will include a picture of the child and will be targeted towards Facebook users living in the general area where an abduction may have taken place. Users will only receive notifications about children missing in their area.

With the ability to share an Amber Alert across the Facebook network, the NCMEC is optimistic that missing children will be found more quickly and more frequently. “Amber Alerts are very rare occurrences,” according to Vacher, “so when you see one of these on Facebook, take a couple of minutes to read the alert, to share the information with you friends and family, and just pay attention to your surroundings, because a tip that you may find may actually result in reuniting a child with their family.”