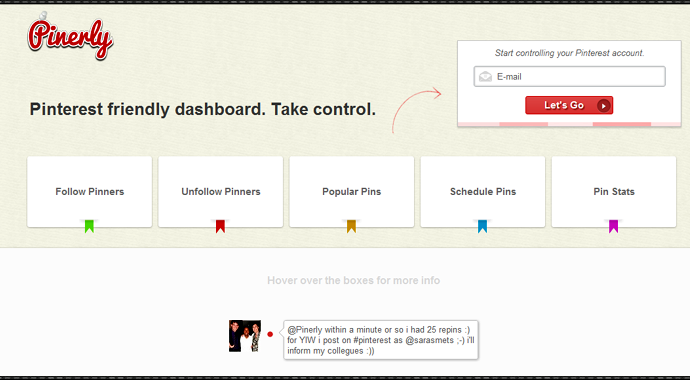 As Pinterest has gained traction wildly in the last year, AGBeat has led the conversation on the topic, helping people to understand how to gain influence and best brand themselves on the visual bookmarking site. We’ve published dozens of news stories and guides, but what has been missing is legitimate metrics for common users. Of course, sites can see what is being pinned from their site by adding their url after https://pinterest.com/source (see an example here), but Pinterest is not yet integrated into social media management tools like HootSuite, leaving a hole in the market.

Not affiliated with Pinterest but built by Pinterest fans, Pinerly has launched by a group of “passionate, hard-working, and ambitious people” that founded Pinerly because “using Pinterest gave us a huge boost in traffic (at some point over 30%) and we wanted to empower brands and users by helping them do the same.” The domain is under a month old, and it is said the site launched barely a week ago.

View popular pins, schedule pins throughought the day to test the effectiveness of your timing, and view statistics to give you a better idea of what is working and what is not.

Pinerly is not open to the public, but they offer a waiting list for users. Sharing the service with your social networks and getting them to sign up can get you bumped up in line, a practice we do not personally condone, but the tool is useful enough that for now, it is worth the wait.

Pinterest isn’t new, it’s been around for quite a while, but the invitation-only visual bookmarking site has exploded in popularity. The bandwagon is growing bigger and faster than Facebook or Twitter in their early days, as Pinterest has becoming a traffic powerhouse, driving more traffic than Google+, LinkedIn and YouTube combined, according to a February Shareaholic study.

Additionally, YouTube users stay on the site for an average of 16.4 minutes per visit, while Pinterest users stay for 15.8 minutes, Facebook users stay for 12.1 minutes and Twitter users a mere 3.3 seconds. Time on site is an indicator of relevance of a site to any user, so sticking around for any length of time is a measure of success for companies like Pinterest.

The growth is not likely to slow anytime soon – they haven’t even hit their peak yet. Brands and every day consumers are flocking to the site for the visual aesthetics and addictive qualities, but it is easy to waste effort, so be sure that as a professional or a brand, you have a strategy before you discover yourself at 4:30 am pinning pictures of puppies.