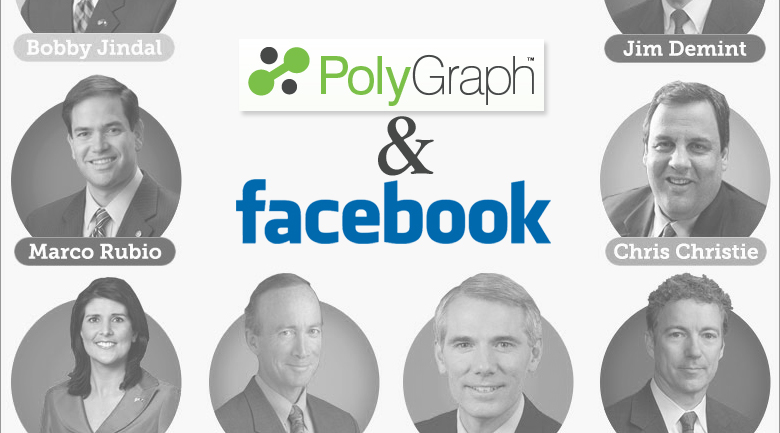 AG introduced you to Polygraph Media in April, showing you how the big data company mines Facebook pages for stats on you and your competitors, and it has gotten rave reviews.

The company’s entire business is focused on social data mining and says, “Data is great and all, but what good is data if you can’t make decisions with it?” With this question, they were inspired to put their tools and reports to work, and have analyzed performance, engagement, and sentiment on Facebook of the top eight potential Republican Vice President candidates.

They call it “Vice President Survivor” which they believe is accurate given the history of social media’s predictive powers, citing a 2010 study that accurately predicted Harry Reid’s victory based on Twitter data, and social data used to predict Boris Boris Johnson’s victory in the London mayoral race this month, and even Facebook has pointed out correlations in the data following the 2010 US mid-term election, noting that candidates with more fans won Congressional races 74 percent of the time and Senate races 81 percent of the time.

Marco Rubio netted out as the best candidate for Romney running mate, across many different metrics and factors. Polygraph says that “With an estimated 150+ million Americans on Facebook (true, in the 13 and older category, versus 18 and older), Facebook should be a powerful tool for political candidates, if not an accurate barometer of American preferences.”

“We know the selection process for the Vice President candidate is extremely intense. Every political, social, and personal decision of a candidate is unearthed and analyzed by teams of Washington insiders,” said Polygraph founder, Chris Treadaway, who is also the author of Facebook Marketing: An Hour A Day. “Beyond the mountains of filings and records, business deals and personal issues, today we have another entire data set to analyze: Facebook data.”

“All potential running mates have been using Facebook avidly as a voice for their political brand and a place to communicate with their supporters. This highly visible, deep interaction between politicians and those they represent provides us with tons of data ripe for mining. Each interaction (like, post, comment, etc.) is a discrete data point that might have more to tell regarding this Vice Presidential selection process than what many may realize,” added Treadaway. “Can recent activity on Facebook help the Romney campaign identify the right and best running mate? This is just what Polygraph Media does for our clients every day so we took a look at what Facebook data would reveal.”

Polygraph Media says they believe deeply in the immense value of data in Facebook and built its business around finding easy, affordable ways for brands – or candidates – to access and assess that information.

A deeper look at the VP Survivor Study

To read more about how the company came to the above conclusions, read the announcement or watch the video below:
[ba-youtubeflex videoid=”KmGcYx9yuuE”]