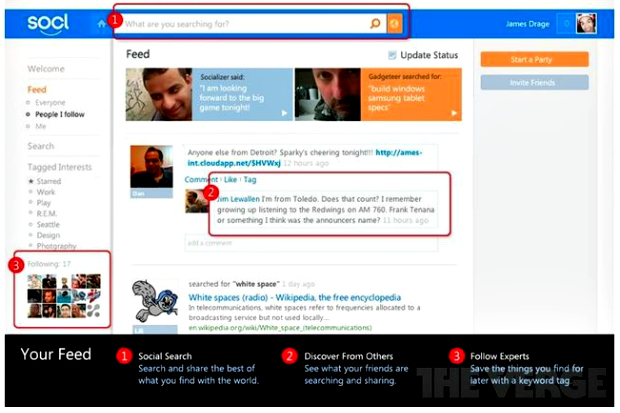 Socl is built on HTML5 and users can share videos, watch video simultaneously with other users while chatting about the video, called a “video party,” and integrates search into the platform in the form of tags. Socl offers social search which is very vaguely described but it seems to be a vehicle for users’ searches to be visible to other users in an effort to get their input a la Yelp as a collaborative search, emphasizing a user’s social graph.

Most of the features in the social network are already apparent in other social networks, but it looks like Microsoft is counting on a slick user interface and users’ fatigue from other sites to fuel adoption. It is interesting that the Socl.com URL was created in 1998, 13 years ago and while it is not clear whether or not Microsoft was the original owner or if they purchased it for this new project, if they did own the URL, what did Microsoft foresee in 1998?

TheVerge.com said, “Socl ultimately needs to better show how yet another social network and search tool can help users find the information they’re looking for; without mobile support or integration across the rest of the Microsoft world, Socl’s got a big hill to climb. We’re hearing Microsoft is nearing the end of its private testing period and will roll this out to a bigger public audience through an invite system. Stay tuned.”

In this article:microsoft, News, socl