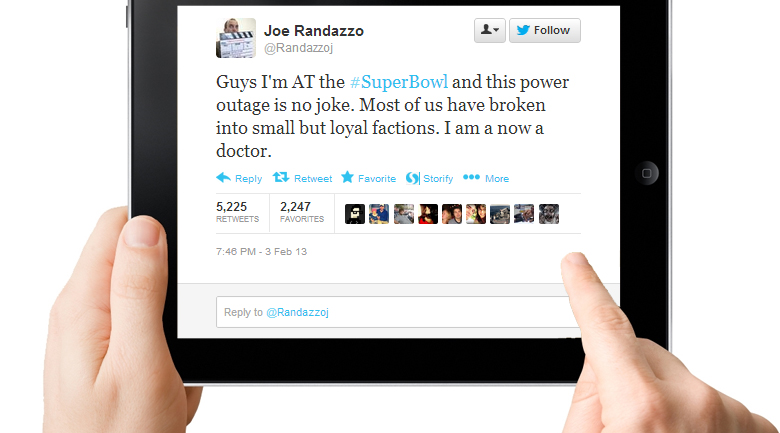 America’s modern past time is to craft clever social media updates during live events from the Oscars to the Presidential Inauguration to the Super Bowl, and when something doesn’t go according to plan like a wardrobe malfunction, people whip out their phones or laptops and get to tweetin’ about it. So when the teams were all revved up after a massive halftime show by Beyonce, and half of the Superdome power went out for over 20 minutes and sportscasters’ ad-lib talents were put to the test, bored viewers became comedians. All of them. Every single one of them.

Personally, my best work was “Lights out, guess we WEREN’T ready for that jelly, Beyonce…” which I was disappointed to later learn that I wasn’t the only jelly joker. The point is not that I’m hilarious (which I am), but that the entire internet had something hilarious to say about the blackout, giving real comedians a run for their money.

Below is a roundup of just a select few jokes from the hundreds of gems to highlight the real news story about last night: everyone’s a comedian.

Note: some of these are racy, racist, ridiculous, and probably offensive, so if you are easily offended, this won’t be up your alley. You’ve been warned.

Some would argue a Ravens win was the big news of the night, but social media reactions prove otherwise.

Big whoop. I black out in New Orleans all of the time.Tiffany Clemons
Go home Super Dome. You’re drunk.Kate Ottavio
Guys I’m AT the #SuperBowl and this power outage is no joke. Most of us have broken into small but loyal factions. I am a now a doctor.Joe Randazzo
Will you guys ever forgive me?Super Bowl Lights
I wish the power had gone out when we were trying to turn around MySpace.Jason Hirschhorn
I bet Jim Harbaugh used to unplug the Nintendo when his brother was winning.Collin Moore
Meanwhile, CNET is no longer allowed to review light bulbs.Ina Fried
BREAKING: During the Twitter, Superbowl goes downRyan Sarver
What does Donald mean? the country is being run by a half-black guy? RT @realDonaldTrump: The Country is being run just like the stadium.David Jones
It was Ray Lewis with a knife in the control room.Michele Catalano
Lesson: do not use a toaster and a hair dryer at the same time in the Superdome.Tom Conrad
Back in the 1900s, they played in the dark. Let’s goLiz Scherer
CBS: Can I buy an ad spot now? I will pay sixty dollars. DM me.Damon Lindelof
@agbeat @AmyVernon @lizscherer next commercial has GOT to be from BW3.Jeff Jacobs
Not that anybody asked, but every adult human radiates at about 100 Watts — in the infrared.Neil deGrasse Tyson
Beyoncé radiates about 500 Watts, is my guess. But to be certain, I’d have to run a special calculation just for her.Neil deGrasse Tyson
…for science.Neil deGrasse Tyson
so it looks like the answer to "can you pay my bills?" was "no" #superbowlpoweroutagerob sheffield
Blow on the cartridge!Jason Del Rey
OH FOR GOD’S SAKES JUST PUT BEYONCE ON A WHEEL OR SOMETHINGAndy Levy
In Friday Night Lights, they lined up cars on the field and turned on the headlights. #superbowlSam Simon
damn lights still not on in new orleans superbowl obama doesnt care about black peopleDANCESTADAMUS
The best ad of the Super Bowl? The 30 minute ad for modernizing our nation’s power grid.Matt Lira
We have nothing to do with thisILLUMINATI
See our top picks for best Super Bowl 2013 commercials.
Advertisement. Scroll to continue reading.