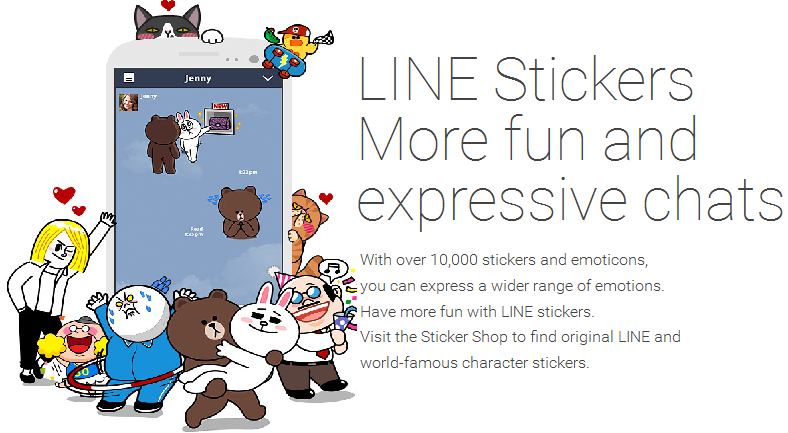 Have you heard of LINE?

With all the chat apps on the market, from Whatsapp to Kik, it is hard to imagine another platform throwing their hat into the ring and being successful, but that’s just what Japan-based LINE has done. LINE originated as a way for users to keep in touch without paying the wireless provider’s pay-per-message fees. However, given the availability of other apps doing the same thing, LINE wanted to do something different.

Oddly enough, what differentiated LINE from the pack was the introduction of stickers to express emotions that are difficult to quickly sum up in a text message. Their stickers are a bit like the now familiar Facebook stickers; large emojis that allow you to express yourself bigger and better. Now, LINE offers thousands of stickers. Users can get most sticker sets free, the rest can be purchased using “coins.” Coins can be bought or won through LINE connected games. If you think stickers are just a fad, consider that LINE users send close to 2 billion stickers a day, with new stickers added almost daily.

Another huge part of their success

I mentioned LINE games. Another large part of why LINE is successful is their partnerships with mobile gaming apps. They currently have partnerships with big names like Disney, Star Wars, and Peanuts for stickers, and these partnerships run over into their gaming apps. One of their biggest gaming apps is Disney Tsum Tsum; a Candy Crush-like game that allows users to collect virtual Disney plush, rather than candy.

Also, LINE operates a chain of retail stores in Japan. While Hello Kitty and Harajuku are insanely popular, LINE’s store, LINE Friends, is rapidly winning customers over. The store offers all the fan-favorite characters from the stickers and emojis. They carry quite an array of products, just like Harajuku, from sticky notes to stuffed animals and everything in between. A store owned not by a retail chain, but rather by a social media company is quite different, but could this be indicative of things to come? Will Facebook and Twitter parlay their brands into retail stores and if they did would anyone be interested? I do not think so. There is something unique in the novelty of the LINE stickers that makes it particularly attractive and so far it is definitely working for LINE.

The ability to text and talk whenever you like without wireless provider’s fees, plus the ability to express yourself through an impressive catalog of stickers, and buy any of these sticker-themed items in store, makes for an impressive combination; perhaps this is why the LINE brand is quickly becoming so popular.