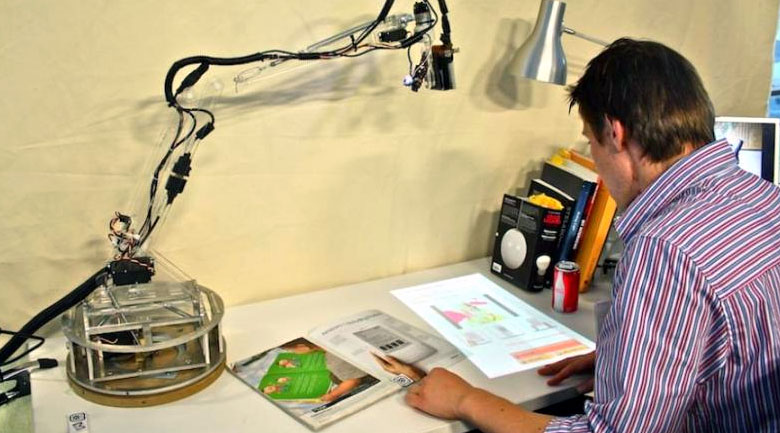 A new technology has emerged from the MIT Media Lab, led by student Natan Linder, fitting a computer into a light bulb socket, combining it with a camera dna projector, turning any flat surface into a basic touch screen.

The LuminAR projects an image on a flat surface, and senses when a hand or finger interacts with the surface, making it akin to an interactive touch screen.

LuminAR uses a camera, a projector, and software to recognize objects and project imagery onto or around them, and also to function as a scanner, connecting to the internet via built-in wi-fi. MIT says that some capabilities of the prototype, such as object recognition, rely partly on software running on a remote cloud server.

Uses of the LuminAR

The final product could be used to take pictures of documents on the flat surface, scan them, and store them in the cloud or be sent by email through the interface.

“I’m really excited by the way this would be used by engineers and designers,” says Linder, who believes it could be useful for any creative occupation that often involves working with paper and other tangible objects as well as computers.

MIT demonstrates the technology in a mock electronics store, using the device to project price tags next to cameras on a table, and buttons that could be used to call up product information. It has been successfully used to make “Skype-style video calls,” projecting the caller’s video onto the wall next to the LuminAR device.

Earlier LuminAR prototypes included a motorized arm for the lamp, but researchers are currently focused on finalizing the bulb-only version. “That design cuts costs and complexity, and also makes the technology easier to adopt,” says Linder. “It has zero cost of adoption. You just change the bulb in your lamp,” he says.