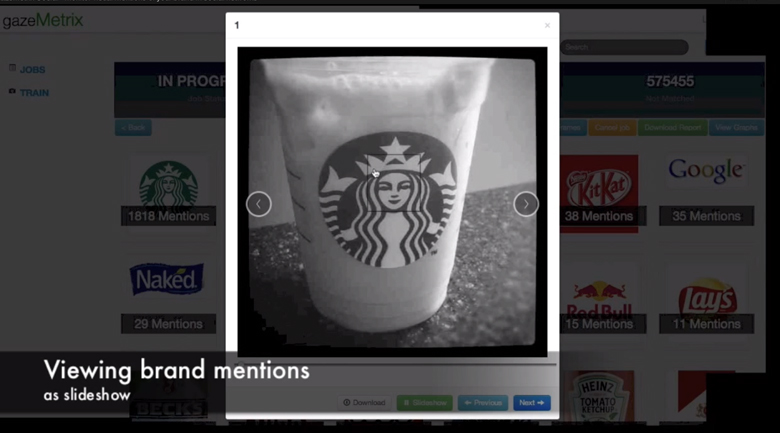 Young startup, gazeMetrix uses image-recognition software to who brands where their logos are being photographed across social media (“visual mentions”), and while they are currently only offering services in the Instagram network, it is likely their goal is to expand their offering across all social networks like Twitter and Facebook.

According to AdAge, gazeMetrix is run by a six-person team, half in California, the other half in New Delhi, starting the company as a side project that didn’t quite work out, so they used the software and evolved into gazeMetrix to uncover where brands are being photographed and by whom, as a means of reaching out to consumers, even if they don’t mention the brand’s name via text.

The company joins a growing number of startups focused on helping brands with analytics, particularly for the burgeoning Instagram photo community, like Statigram and Simply Measured without users having to change their behaviors, rather offering brands means of connecting with users based on formerly unseen data.

The problem with most social networks is that hashtags are abused, and social media professionals must filter through a great deal of spam, fake updates/accounts, and just plain irrelevant mentions in order to connect with consumers legitimately addressing their brand through words, or visually, making gazeMetrix’s visual mentions capture method extremely useful for social media professionals.

With an ad agency in Turkey as their first client, the founders tell AdAge that they are using their presence in the U.S. to court potential customers, and is currently tracking 25 brands on Instagram, which is led in visual mentions by Starbucks, followed by Coca-Cola, BMW, Monster Energy, Google, and Corona.

The future of visual mentions for small businesses

While this tool will likely only be financially feasible for large enterprise brands, as with any technology, with a larger user base, the cost will eventually come down, particularly if others get in on the visual mention game as consumers passively address brands without ever typing their names.

Small businesses should take note that technology is changing and social media long ago left the theory phase and as everyone knows it works, the world is scrambling to analyze the big data streaming out of all of the social networks to make efforts more time and cost effective.

More meaningful metrics, particularly visual mentions will easily be the mainstream focus in 2013, as technologists have been breaking ground for the last two years to reach businesses of all size, typically starting with enterprise and working their way down the economic food chain.