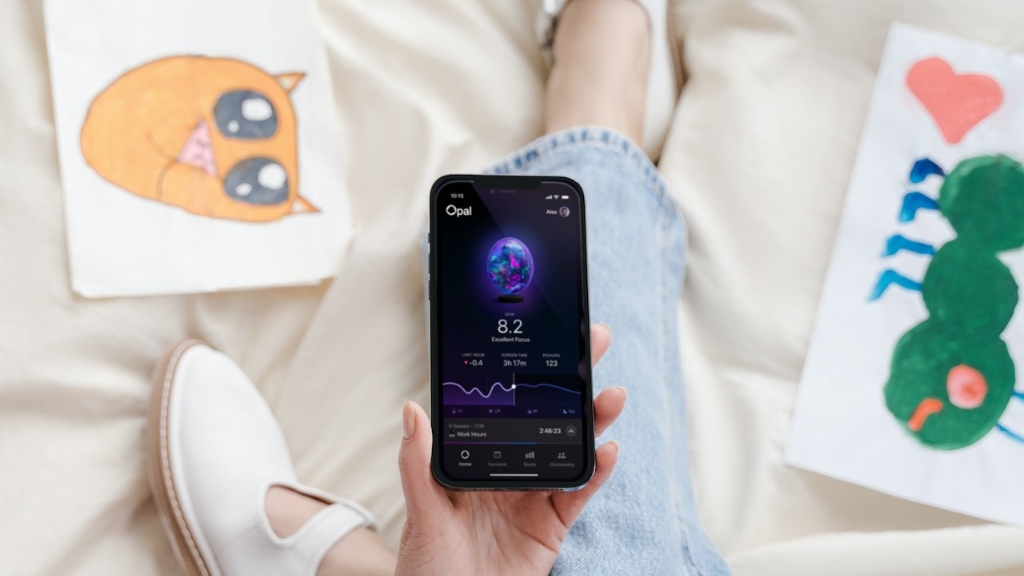 Above a graphic of a purple and blue gemstone with a smiling face, the Opal Manifesto proclaims: “Phones Can Make Us Happy.” In the text that follows, the manifesto refers to social media companies as “distraction companies” that “have turned our screens into mindless distraction devices.” The proposed solution? Opal, an app and Chrome extension that offers users the ability to remove apps from their phone on a predetermined schedule, in order to combat endless scrolling and help “rewire our screens for mindfulness.”

Originally launched 2 years ago, the new Opal released in September 2022 is fully integrated with iOS 16’s Screen Time API, making it the first app aimed at adults to do so. Most apps concerned with screen time and usage reports are marketed toward parents wishing to monitor and limit their child’s activity.

On the contrary, Opal is fully devoted to an adult user base, demonstrated clearly by its branding and the vast array of features offered in addition to scheduled app blocking.

First is the Focus Score which offers real-time data on your activity, including how many times you’ve picked up your phone, notifications you’ve received and checked, and how much time you’ve spent on certain apps.

Opal takes the Focus Score beyond Apple’s in-house Screen Time app by analyzing the data it collects and using that to project a future prediction, known as Attention Weather. For example, if you check Twitter at the same time every morning, you’ll get an hourly “Focus forecast” letting you know that you may find yourself compelled to do some retweeting soon – allowing you to decide if you will break or abide by your social media habits.

Similar to the Focus Score is the Focus Report, a weekly breakdown of your screen time and app activity. This is sent to you via push notification or email and offers an overview of the last 7 days of your focus data. The Report also includes projections of your future behavior based on historical data, as well as comparisons from your previous weeks of data.

The Focus Cafe links to a 24/7 live YouTube video playing atmospheric instrumental tracks designed for working, akin to the Lo-Fi Beats to Study To channel familiar to everyone who’s written a college paper since 2014.

The Opal Media Library has links to book recommendations, podcast episodes, TED talks, and Twitter threads about productivity, mindfulness, and healthy relationships – every topic that could be related to our ability and willingness to stay focused on our overall well-being.

Finally, Opal offers Focus Coaching with Hilary Andreini, a PCC Certified coach who specializes in adult ADHD management. For a $399 fee, users can enroll in a 4-week coaching plan and a lifetime subscription to Opal’s app.

Back in 2013, researchers at Carnegie Mellon found that when asked to read and respond to questions about a short paragraph, readers who received and checked text messages while reading performed 20% more poorly than those who did not.

Imagining the scale of that experiment now, in a world of ever-expanding forms of social media and daily distraction makes a great case for Opal’s functionality.

A yearly subscription to Opal costs $99, though interested users can sign up for a 7-day free trial.

In this article:opal, The News