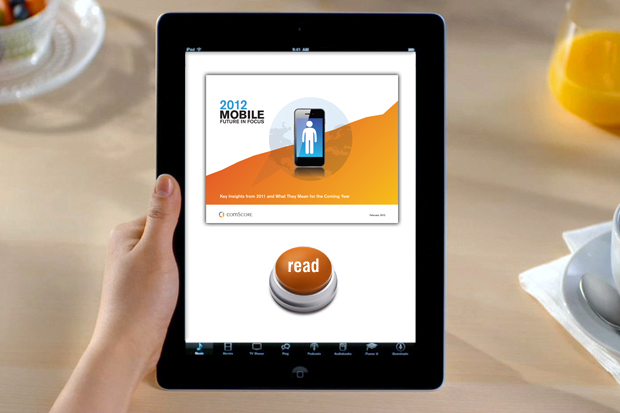 “2011 proved to be a groundbreaking year for the mobile industry, with smartphones hitting the mainstream, tablets emerging as a formidable fourth screen, and consumers increasingly integrating mobile behaviors into their lifestyles. As the industry continues to innovate and more consumers look to multiple devices and platforms to consume digital media, we expect the mobile and connected device landscape to be shaken up even further in 2012,” said Mark Donovan, comScore Senior Vice President of Mobile.

Donovan added, “As mobile channels present a more personal, social, and ubiquitous experience to consumers, advertisers and publishers have an opportunity to better engage target audiences, given an understanding of how to connect and leverage the unique characteristics of these emerging platforms.”

Nearly 42 percent of all U.S. mobile subscribers now use smartphones, according to comScore and mobile media use is on the rise, from mobile browsing, use of apps to content downloads. In many international markets, mobile media use is used by over half of all mobile users. The company says that the proliferation of high-speed networks and the increased public WiFi availability have amplified smartphone growth.

In 2011, the clear winners in the platform wars were Android and Apple, with Android accounting for nearly half of the smartphone market and iOS (Apple) accounting for 30 percent of the market. According to comScore, Android adoption is growing particularly well in Europe, outperforming Symbian.

Trend three: apps on the rise

Last year, America and Europe saw substantial growth in mobile app use, exceeding the growth of mobile browser use. Both markets are seeing the same percentage of their mobile audience use both apps and browsers in order to access mobile media. The fastest growing mobile media categories in America last year were health followed by retail and commerce (electronic payments, auction sites, etc.).

Over half of all smartphone owners in America used their device to perform retail research while inside a store in 2011, which comScore says illustrates “the emergence of savvy smartphone shoppers who bring online shopping behaviors in-store – a trend seen in other markets as well.” By the end of last year, nearly one in five smartphone users scanned product barcodes and nearly one in eight compared prices on their phone while in a store.

Fully 64.2 million smartphone users in America access social networking sites or blogs from their device at least once in December, with over half of those doing so nearly every single day. “While mobile social networking users showed the highest propensity to read posts from people they knew personally, more than half of those in the U.S… also reported reading posts from brands, organizations, and events,” comScore reports.

2011 gave rise to tablets going mainstream as they became quite popular, taking under two years to account for nearly 40 million tablets in use among U.S. mobile users and outpacing smartphones which took 7 years to reach the same. In December, nearly 15 percent of American mobile users also owned tablets.