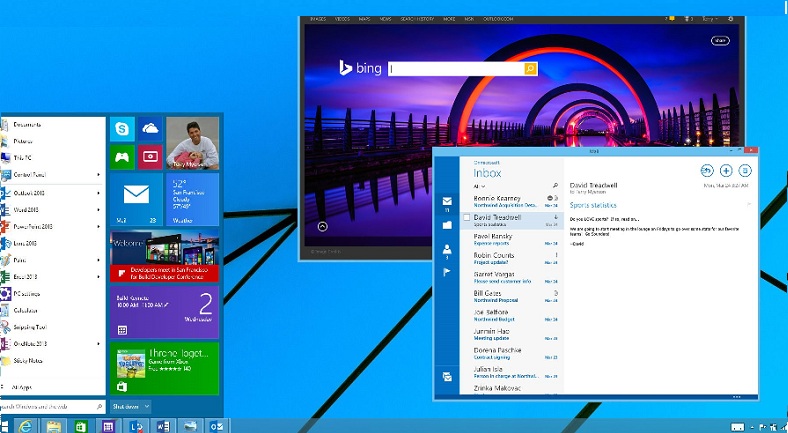 Very soon Microsoft will offer a look into its next operating system. According to the Verge, information regarding a Windows 9 release has been leaked and tentatively scheduled for September 30, 2014.

The most surprising fact of the forthcoming release, seems to Microsoft’s intent to move away from the touch-centric theme of Windows 8. There will be an “old style” mini start menu, and they have removed the Charms bar, but this could all change before the scheduled unveiling. After the official unveiling, there will be a program for early adopters to experiment with, soon after.

Windows 9 is current codenamed “Threshold” internally, while the final developments are made, but techies speculate they will change the official name to Windows 9, upon unveiling. The report also states it may include an revised version of Cortana, the company’s digital assistant intended to rival Apple’s Siri and Google Now’s voice controls. Cortana was first unveiled for Windows Phone earlier this year, allowing it to give Apple and Android a better run for their money.

Microsoft is also reportedly experimenting with virtual desktops, which will allow a user to have more than one desktop on a single computer. Allowing you to aggregate media projects from work and home, as well as, organizing tasks and synching web browsing. There are also reports that Microsoft will offer a free cloud version of Windows 9. Others believe it will be offered on some type of subscription system. While the unveiling could happen in September, the general public should expect it to roll out somewhere near Spring of 2015, if this release follows the pattern of previous releases.

As more details become available, it will be interesting to see if Microsoft makes specific adjustments for mobile technology, or if they will remain focused on desktop users’ preferences. As it is now, it appears that many elements will display well on a desktop, but will loose something on mobile devices, specifically the way apps are displayed. As with any development though, I am sure more tweaks will be made before the final release, but Windows 9 is showing a lot of promise.

In this article:microsoft, Technology, unveiling, windows