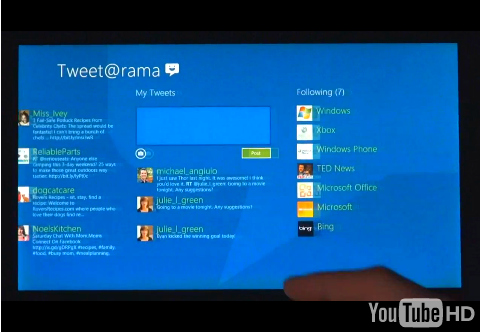 Code named “Windows 8,” and also referred to as “Windows Next,” we gave you a sneak peek of some of the functionality of Microsoft’s newest operating system (OS) in April and now, Microsoft has finally revealed the inner workings of the user interface that operates on an interactive tile basis rather than an icon basis.

What Realtors most need to know about the next Microsoft operating system is not just that it’s cool and looks like the Windows Phone OS, but that it is consistent between tablets and PCs, a move that we believe helps get tech users to more uniform operating systems between devices which helps with the learning curve of the less tech savvy.

One of the striking features to us that was barely grazed in the video above is that Microsoft is betting on HTML5 which could open a lot of doors for the developer world.

Multitasking is innovatively presented in the new OS and Microsoft’s “fuzzy hit targeting” that allows for touch to be less accurate allows older apps to function better on touch tablets and PCs.

The native browser is Internet Explorer (IE) which is our least favorite browser, but we wonder how the future versions of IE will be more like the new Windows Next, therefore more appealing to users and ultimately developers. Could Windows save IE after all?

There is no word yet of when the operating system will hit the market and it is suspected that next year an announcement will be made, so it could be quite some time before we even know the true name of the next Windows OS.

In this article:News, Technology, windows 8