You’ve seen the posts on Facebook that show a wad of cash in hand, offering ways that you too can own such tremendous amounts of cash. You’ve passed by them, fully aware that they’re spam or a scam, but some people see it and their eyes grow to the size of a dinner plate. Who are these people that fall for the pictures of cash that keep these spammer scammers continually posting these lame posts?

In my experience, this type of post is specifically designed to reach the under-educated, the under-priviledged, and the youth that just don’t know any better. Let me tell you a story…

I was sitting at the computer with a young adult, only 21, and showing him where all to look for entry level jobs. Mentoring this kiddo, I realized that he’d never actually used the internet to find a job, just taken what was around his neighborhood.

He was told to bookmark every job opportunity that looked good to him, and at the end of the day, there were dozens of Facebook posts that were flashing cash, bookmarked in all of their glory. I thought it was a joke at first, but it wasn’t – he really, truly believed they were opportunities to advance his future, telling me, “if it wasn’t legit, he wouldn’t have all of that cash in his hand.”

Here is an example of one of the profiles that flashes cash to recruit people: 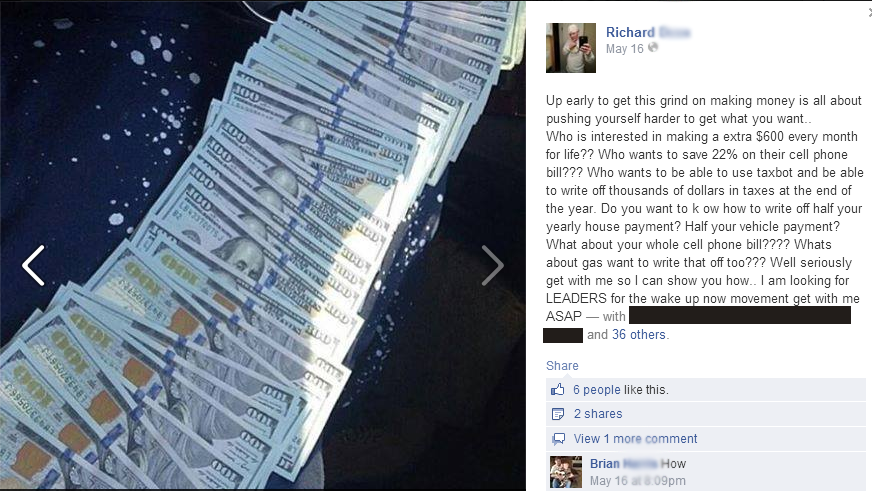 In his mind, he doesn’t have that kind of cash, so if that other guy does, he must be the successful one, putting him high up in the food chain. I explained to the mentee that theoretically, he too could have this wad of cash by simply cashing his last paycheck. “But look how much money he has!”

He still needed convincing. He firmly believed that if he just had $40 in his bank account, that he could be part of this club to sell stuff to people. “My friend makes $1,000 a month because people click links he shares on Facebook.”

I asked if he’d ever verified his friend’s bank account. He hadn’t. I asked if his friend had a car or another job. He lived with his mom and had no car. Again, oooh, big ballin’!

The truth is that flashing cash is nothing new, but doing so on Facebook does trick young, under-educated people that desperately want to make money and drive an Escalade, but whose rap career didn’t exactly pan out because they never wrote any lyrics, rather sat around getting angry that they hadn’t been “discovered” and made famous yet.

Flashing cash appeals to the dreamers who haven’t yet processed that wealth comes only by hard work – they see 2 Chainz flying around the world, but don’t see the part where he took years of slumming to get where he is, nor do they see that he now works 18 hour days (taking every interview, constantly writing new lyrics, rushing to and from shows, doing album signings, managing his own social media, working to pick out wardrobe, and so forth), just the part where he’s already rich.

It’s unfortunate that people take advantage of others in this way – call it spam, call it a scam, but either way, it is a damn shame that a specific demographic falls for it and the cash flashers know it, they’re just using a new mechanism (Facebook) to deliver an age-old message (get rich quick (snake oil)).