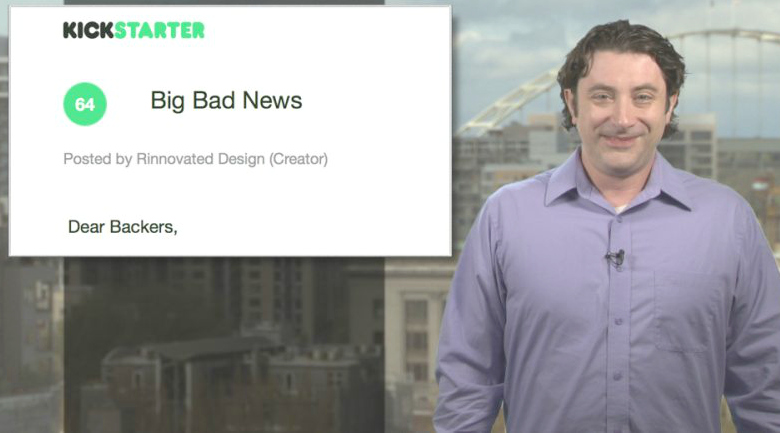 I always wondered what BS smells like and now I know. The Kickstarter Peachy Printer scam is so unbelievably crooked that I can’t help but wonder if these guys had just put the same amount of effort into actually following through on their promises that they did on siphoning money from investors, something worthwhile may have actually been produced.

This is going to be a wild read, hang on to your butts.

Read also: Shady infographic practices you should know about

Two young entrepreneurs come up with an idea to create a desktop 3D printer that would cost consumers only $100. Dreamy, right?

Impressed Kickstarter investors ponied up $600,000 (Canadian). For reasons that completely escape me, the inventor and his partner do this without having set up a business banking account, so all the money goes into a private checking account where one of the partners’ proceeds to spend most of the funds on a new house!

Said 3D printer never gets made, no one gets arrested, and the whole scam is covered up for more than two years before it goes public.

Note from the Editor: This all feels like an elaborate hoax, but is being reported by even the most credible sources (like BBC), but we’re still holding our breath – filmed confessions that sound like a high school play? We’ll see.

A template for success

Kickstarter has set up a process where entrepreneurs have the potential to find investors so funds can be raised and dreams can be realized. The track record for this is pretty good because Kickstarter seems to be stronger than ever and is extremely vigilant about protecting their community.

Further, Kickstarter tells you (in fine print) that respective products may never see the light of day. Which is why money pledged is considered a donation.

But I digress. The Peachy Printer debacle is a prime example of why the government is getting involved and trying to regulate crowdfunding sites in order to make those receiving funds legally responsible.

Always read the fine print. This is from the Kickstarter Website:

“Kickstarter does not guarantee projects or investigate a creator’s ability to complete their project. On Kickstarter, backers ultimately decide the validity and worthiness of a project by whether they decide to fund it.”

What is a creator obligated to do once their project is funded? (Notice it says fundamental and not LEGAL obligation). I’m glad you asked.

“When a project is successfully funded, the creator is responsible for completing the project and fulfilling each reward. Their fundamental obligation to backers is to finish all the work that was promised. Once a creator has done so, they’ve fulfilled their obligation to their backers. At the same time, backers must understand that Kickstarter is not a store. When you back a project, you’re helping to create something new, not ordering something that already exists. There’s a chance something could happen that prevents the creator from being able to finish the project as promised.

If a creator is absolutely unable to complete the project and fulfill rewards, they must make every reasonable effort to find another way of bringing the project to a satisfying conclusion for their backers.”

That is what is SUPPOSED to happen. It doesn’t mean that is what WILL happen.

Integrity is SO overrated

You can see Kickstarter has tried to insert some inherent sense of doing the right thing. All they do is provide a template. They get their percentage and sleep well at night because investors more or less know up front what they are getting into.

As bad as the Peachy Printer project is/was, it’s nothing compared to the recent Zano mini-drone initiative that scorched investors for several million dollars.

In both cases, the project developers apologized and tried to smooth things over by presenting professionally made graphics that explain how the money was spent. I noticed in both cases that no one made the effort to include a pie chart showing expenditures for a new house or a private island in the tropics, but I guess that’s neither here nor there.

In the bigger scheme of things how this ultimately ends is anyone’s guess. Regarding Peachy Printer, so far no printers have been made, most likely for the simple reason that one of the partners in the project took the money and built a house with it. Investors are likely pissed off because they got burned.

Will this give investors more pause before investing in crowdfunding sites? Maybe, maybe not.

Lino Rivera tells us, “My overall opinion on crowdfunding is a positive one, but there are no doubt pitfalls at every corner. I’ve had customers come from that space who were wildly successful out of the gate only to lose steam and ‘realign themselves’ a year after. I’ve backed a few projects myself, now that I think about it though, I haven’t received anything yet from those campaigns.”

“The last one I backed was actually from an established company who said crowdfunding sped up the time to market,” Rivera notes. “Really though, I believe it had more to do with market validation, which I think is one of crowdfundings greatest strengths. Before investing in huge amounts of capital, you get to see if it is even something the market wants.”

Will one bad apple spoil the bunch? Probably not, because as Rivera notes, there are other reasons for crowdfunding than the actual dollars. And Peachy Printer is hardly the first to victimize the crowdfunding space, so stay tuned.

All links he mentions are on this site.