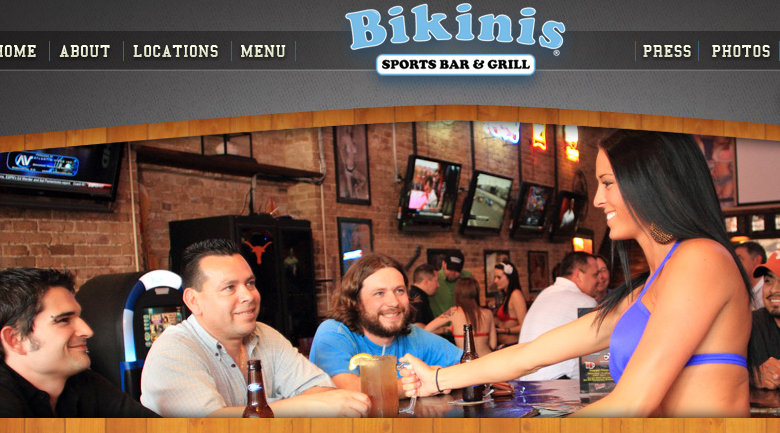 When you think of eating a hamburger or wings served by an attractive lady, your mind probably wanders off to Hooter’s or Bone Daddy’s, or even Tilted Kilt or Twin Peaks, all commonly called “breastaurants,” which started as a slang term by visitors and has ultimately become how the industry is known and often calls itself as much in both advertising and elsewhere.

The term is no longer applicable to any of these scantily clad waitstaffs, no, Doug Guller eccentric investor in Texas who owns Bikinis Sports Bar and Grill has announced that the U.S. Patent and Trademark Office has awarded his company the trademark to the term “breastaurant,” so now all of his larger competitors will be knockoffs, violating his federal trademark.

According to ABC News, Guller said, “We’re really excited about receiving this federal trademark. Our team has worked hard over the last seven years to offer a unique experience to our fans. It just further solidifies that Bikinis Sports Bar & Grill is America’s ONLY breastaurant.”

This is the same Guller who bought an entire Texas town off of Craigslist, so no one in the state is surprised that his creative business skills would extend to the patent offices.

Competitors have not yet made any negative statements, but Hooters did tell ABC, “The restaurant model that others have dubbed ‘breastaurants’ is a moniker too shallow to define Hooters.”

In this business model of attractive wait staff serving American food, Hooter’s has long said it set itself apart claiming that it is a values driven organization that seeks friendly staff, and that they are not a breastaurant anyhow.

This trademark could help to separate Hooters from the “breastaurant” pack, but in all likelihood, the attention given to Guller’s patent will expand consumers’ use of the term and give Guller the ultimate upper hand – as he says, they’re now the “ONLY” breastaurant.

In this article:bikinis, breastaurant, Marketing, trademarking