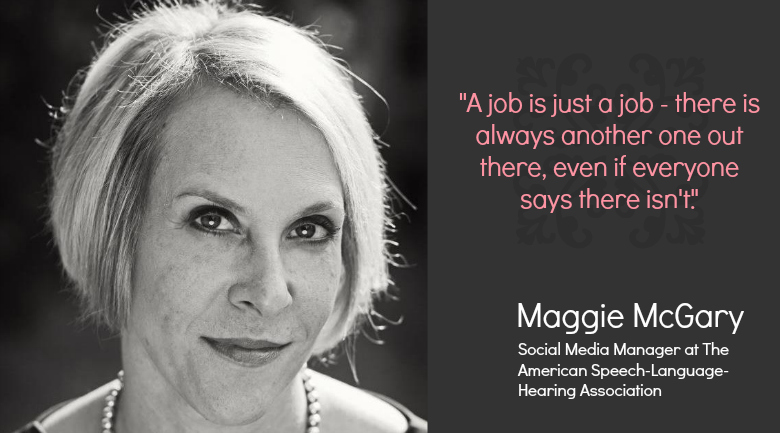 Advice from an industry veteran

You probably know Maggie McGary from her 10+ years in the association world, or you may have seen her on stage talking about the state of affairs of both non profits, social media, and the intersection between the two. But McGary didn’t graduate college and immediately land in her current career, no, like most people, it was a diverse path that has gotten her to where she is.

Millennials are one of the most under-employed groups in America, and many are frustrated, but we look back at McGary’s lengthy career, and she advises flustered millennials to just get started, and while the job landed today may lead to a dream career down the road.

Q: Tell us about your current work – what do you do?

Q: How did you get into your current role? What was that path like?

A: I started at ASHA as a web content developer, a skill I was forced to learn on the fly in my previous job as web content coordinator. At that point, I was a personal blogger with a passion for social media, and managed to morph my role away from web content and into social media management.

The path has been interesting and challenging; what started out as just pure fun and a hobby is now the way I earn a living… which is both good and bad. Good because, well, who wouldn’t want to get paid to do what they do anyway in their own time, but bad because now that it’s a job, when I’m doing it for fun, it feels like I’m still at work! But all in all, I definitely can’t complain (although I need to find a new hobby!).

A: I can’t even remember, that was so long ago! Ok, I have a vague recollection of being in my first job out of college, secretary for the trade association representing the nuclear power industry (how I wished the title was at least “administrative assistant” so I didn’t feel like I’d totally just wasted four years getting a college degree. But, secretary it remained until I successfully lobbied to change it to “media relations assistant”…or maybe that’s just what I put on my resume?).

I was, in fact, a media relations assistant, in charge of preparing the daily “clips” package for the media relations staff – a task that consisted of reading about 10 newspapers, and cutting out any/all articles that in any way related to the nuclear energy industry then gluing them onto copy paper and, once the whole chore was complete, making copies and distributing them, and I monitored the AP wire as it came in over a dot matrix printer, assembling press kits, answered phones, and also word processing, as it was called back in the day.

That was my first inkling of techie-ness, as I was pronounced the Wang expert in the office (for those of you who think I’m just being rude, Wang was the 1990’s equivalent to Microsoft) and tapped to be trained as the Wang administrator. At the last minute, they decided that the mail guy deserved it more and I was left to my clips package and coffee making duties. Just as well, because today, being a Wang adminstrator would be a useless skill, while coffee making is something I still do daily… but just for myself.

Q: How has your professional life evolved since then?

A: Well, no more Wang, for one thing. Or dot matrix printers, or cutting and pasting newspaper articles. Now, they have this thing called the Internet and I spend about 16 hours a day on it. I did manage to work my way out of the secretarial pool, and up to a managerial position with my own office.

Of course, now I’m in a cubicle again, but I also have a job that can be done from virtually anywhere, and stuff like my title or where I sit doesn’t really matter to me anymore.

Something I never dreamed I’d be doing back then is something I do frequently now: public speaking. My degree was in English and I always thought I’d be a writer, which I’m not, exactly, although I get to do a decent amount of writing between my personal blog, blogging at work, and writing occasional articles for ASHA and other publications.

All I can say is thank god for the Internet – it has opened up a career path for me that I’d never even have been able to dream of back when I was 21, because it would be another five years before I’d even hear about “the worldwide web,” and another five to become totally addicted to it.

Q: What career advice do you have for millennials?

A: The main thing I’ve learned in the 20+ years I’ve been working is that all you need to do is get a job, somewhere. It doesn’t matter doing what, because most of the opportunities that arise come from already being inside a company. Whether it’s meeting people you learn from, seeing other jobs you never knew existed and deciding that’s what you want to do–or never want to do, or being able to try on different hats before committing to a certain career (or even just doing that particular job for a year or two), you can learn a ton just from working, period.

I’ve done many different things over the past 20 years – planned and run meetings, edited, created websites, fetched coffee and lunches, sat through a billion meetings, traveled, met a ton of cool people, and made some good money. I cared a ton about my title at various times, but in retrospect, it doesn’t matter what it was at any point along the way, or what it is now, for that matter.

What matters is that I’ve managed to figure out a bit about what I hate doing and what I like doing, and what’s important to me versus what isn’t. I still don’t know where I’ll end up, but at least I know there are a lot of choices out there.

Also, remember that a job is just a job – there is always another one out there, even if everyone says there isn’t.

In this article:career advice, millennials