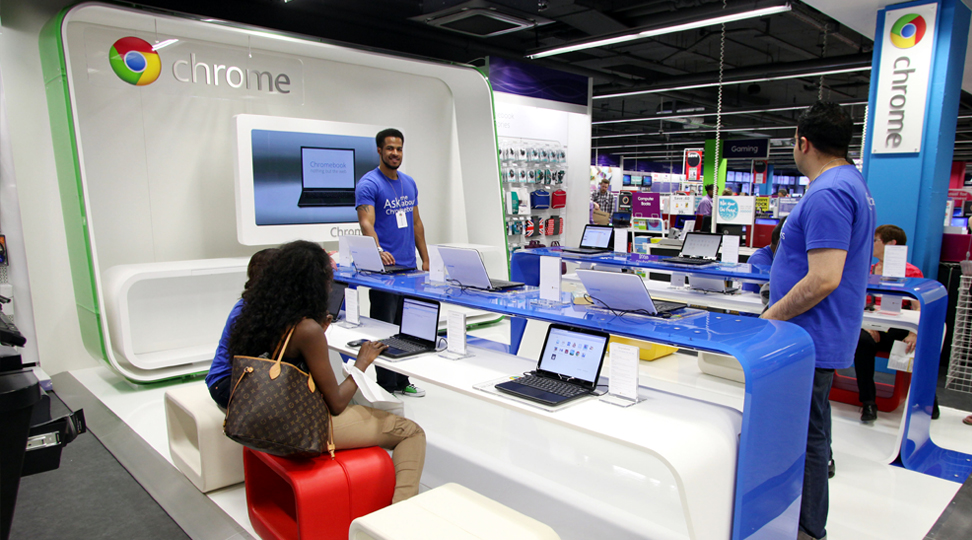 Google retail stores on the way?

It has been rumored that Google is paving the way to go head to head with Apple and Microsoft and ultimately Amazon, with Google retail stores. The rumors are based on the Google Shopping site which appears as if Google might want to get in on the retail game, but the company has denied any possibility of any retail stores.

AllThingsD said, “Behind closed doors, some have wondered if Google was building up the infrastructure before making the move into selling physical items. Along with the updates to the [shopping] site, another recent announcement that got people chatting was when Google announced last month that it acquired BufferBox, a locker service where consumers can safely pick up packages.”

Further, “[Google VP Sameer] Samat said that [the deal for] BufferBox had nothing to do with becoming a retailer; it was about helping other retailers to become more competitive.”

“This kind of denial looks more like a confirmation.”

MarketWatch’s John Dvorak writes, “I don’t know about you, but this kind of denial looks more like a confirmation. Right now, the Google shopping pages look a little like an Amazon sales page, but apparently it’s only to link to actual sales sites. One must assume that there is some fee or commission for anything sold through there. It may even become a serious income stream someday.”

Google continues to say it does not want to become Amazon, it does not want to operate warehouses or retail fronts, but analysts aren’t buying it, based on the infrastructure being built. Amazon and others would likely buck any move of this nature, and anti-trust cases would fly, but based on Google’s track record, if they wanted to pull it off, they just would.

Dvorak asks, “What are the chances of Amazon buying Barnes & Noble Inc.? The book value of B&N is under $1 billion, and Amazon could redesign the stores so sell a variety of goods, plus the books. I’d love to see something like this happen so we can watch Jeff Bezos work his magic.”

The missing link everyone is missing – Google has already gotten started…

Check out the picture above – it looks a lot like a Google store, right? Well it is. Kind of. Earlier this year, Google launched the Chrome Zone, a store-within-a-store in London, barely two tables wide in a Currys and PC World store where it sells its Chromebook machines. There has been speculation that the space could expand, and the product offering could also go beyond Chromebooks.

This spring, the company filed planning permissions for its first standalone retail store, 1,323 square feet at its European headquarters in Dublin, Ireland to sell “unspecified Google merchandise,” according to Bloomberg, while Google said the space could be used for anything, despite analysts noting the permit was for retail.

Remember, Apple started out as a small retail location in a mall outside of Washington, D.C., so who is to say that a tiny London location and possible Dublin location isn’t the beginning of Google’s retail destiny, whether they sell their own technologies, or take an Amazon route?