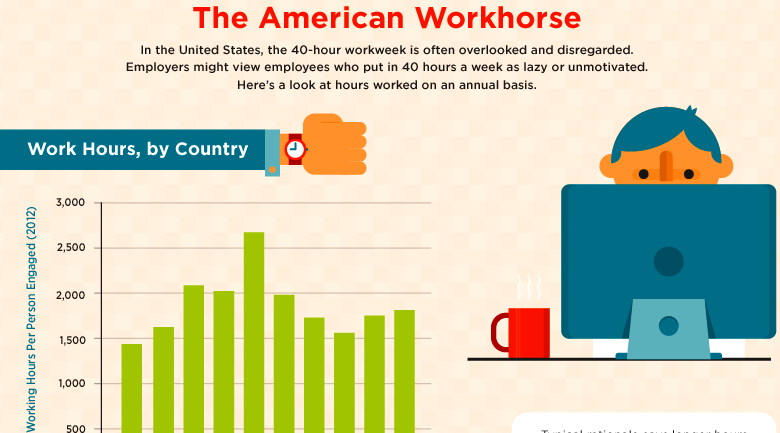 Working longer hours does not necessarily mean working productively, according to a new study, in fact, it can have the opposite effect. The longer a person spends chained to the desk, the less likely they are to remain actively engaged with their tasks.

Many of us work more than forty hours a week in an effort to keep ahead of deadlines and get a jump start on next week’s project, but this study suggests that a 40-hour work week may appear  like you are doing the bare minimum: “employers might view employees who put in 40 hours a week as lazy or unmotivated.” If this is true, this is attitude will certainly not help boost employee’s productivity.

The U.S. is super average

According to the study, the United States, is about average in terms of work hours. Korea and France hold the next highest number of hour worked per week, with Japan and Portugal close behind. Korean employees work approximately 2,600 hours per year. That is roughly 50 hours per week. A U.S. employee averages about 1,600 hour per year; or 34 hours per week.

It should be noted it is not clear whether or not holidays, vacations, and personal leave has been factored in to these figures. The country with the greatest productivity, also has the shortest number of hours worked: Germany. German employees work approximately 1,400 hour per year and retain the highest amount of productivity. France and the United States are the next highest, respectively. South Korea, is next to last even though they work more hours.

Productivity aside, employees with shorter work hours are more loyal, suffer less stress and illness, and are more likely to be productive, according to this survey. If you must work 40 hours a week, there are several things you can do to ensure you retain both your productivity and your sanity. Prioritize your tasks, begin by focusing on items that make or break your business, these should be completed first, and any remaining time dedicated to less important tasks.

Create a strategy to make completing tasks easier; whether you use an app for this or just pen and paper; the biggest time-waster is redoing tasks, by forging a plan, you will avoid redoing things. If you simply cannot accomplish everything on your list, consider hiring help. Even if it is temporary through a freelancing organization, hiring a qualified professional can keep you from ignoring your priorities, without put additional strain on yourself.

Which is the last point: schedule personal time to keep your stress reduced and maintain relationships outside of work. Work should not supersede the rest of your life. Try to keep your tasks in mind, without letting them run your mind.

In this article:productivity, work week