In the wake of President Obama’s re-election, small business optimism took an unexpected dramatic nosedive, according to the National Federation of Independent Business (NFIB) which tracks sentiment among small firms, falling 5.6 points to 87.5. The survey found that 49 percent of small business owners expect future business conditions to be worse than current conditions, marking one of the worst readings is the history of the survey.

In October, a record percentage of owners were uncertain about the outlook, and it appears that the sentiment took a national turn for negative in November, reaching the pessimistic levels seen just after the economy collapsed in 2008. 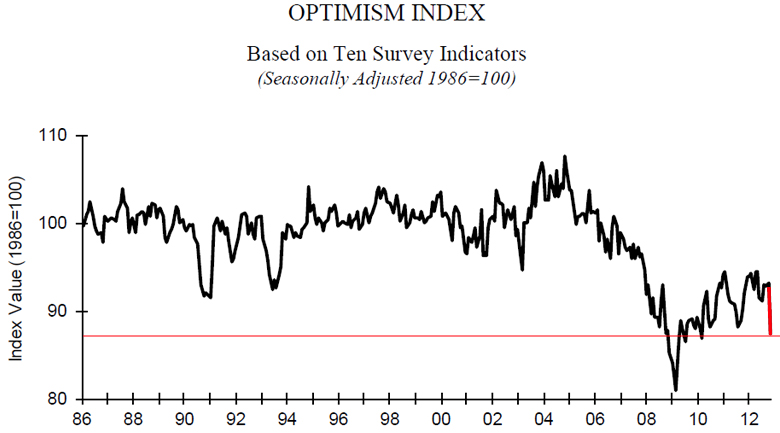 NFIB Chief Economist, Dr. Bill Dunkelberg said, “Something bad happened in November—and based on the NFIB survey data, it wasn’t merely Hurricane Sandy. The storm had a significant impact on the economy, no doubt, but it is very clear that a stunning number of owners who expect worse business conditions in six months had far more to do with the decline in small-business confidence.”

Dr. Dunkelberg continued, “Nearly half of owners are now certain that things will be worse next year than they are now. Washington does not have the needs of small business in mind. Between the looming ‘fiscal cliff,’ the promise of higher healthcare costs and the endless onslaught of new regulations, owners have found themselves in a state of pessimism. We are forced to ask: is this the new normal?” 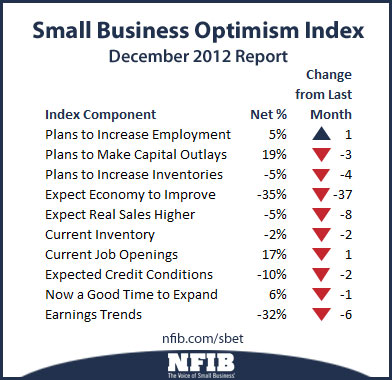 In November, small business owner attitudes toward the future of the economy shifted dramatically, falling 35 percent, marking a new crash of sorts, one of perception. Small businesses have struggled since the economy crashed in 2008, and it appears the same bad feeling that blanketed the nation immediately after the crash is back. Perhaps if holiday sales are healthy, the outlook will change, but it appears the sentiment could be more closely related to politics than in recent months.