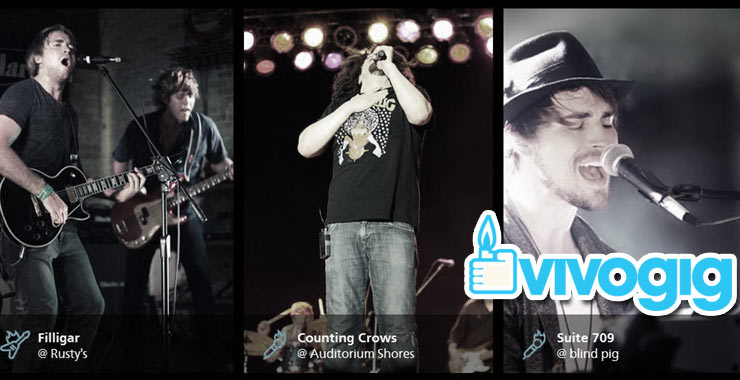 From South Africa to Austin

AGBeat is headquartered in Austin, the Live Music Capital of the World and birthplace of Austin City Limits and South by Southwest, so we are surrounded with music and most people in the city has friends in the industry, be they performers, producers or writers. This environment is what brought Vivogig founder, Daniel Senyard to Austin all the way from South Africa.

I first bonded with Senyard over a wild band from South Africa via something a mutual friend shared on Facebook, and when we met in person at the Big Ass Social Happy Hour, our discussion focused solely on music, with his passion shining much more brightly than mine, despite my growing up in Austin surrounded by music. Senyard is a family man first and foremost, a music junkie second, and his passion has required sacrifice, but has now blossomed into one of the hottest, most popular tech startups in the music industry – and he did it without having any experience developing an application.

New solution for an obvious problem

As a frequent concert-goer, Senyard noticed two things. First, that people collect their concert tickets and photos of concerts almost like a “trophy case” and refer to them later so they can say they saw a band before they went mainstream. Second, people are generating endless content that is specifically relevant to the person standing next to them at a concert, but there was no way to really connect all of that media with the users. As a social media strategist, Senyard had spent time using and studying geolocation apps like Gowalla (before it sold to Facebook) and Foursquare, but found himself using them more out of obligation, not fun, and found there were no real discovery options and that most content was unrelated.

These three observations came together to form a solution to this complex problem: Vivogig, which allows users to capture live music photos and compete to earn the top spot on the photo charts. The startup gives music fans a place to put their concert-specific photos, much like a geolocation app, and comment on the photos, thus creating an instant community for music fans which is something all music industry insiders want and need.

Challenges in creating a tech startup

Senyard says that technology is like religion – everyone has a different answer as to what the right way to go is. When he arrived, he didn’t know anyone in Austin, he didn’t have a tech background, or have endless contacts in the music industry, so his battle was uphill from the start.

Early on, he began asking questions of anyone who would talk to him, especially non-developers, and found inspiration by learning about how other startups came to be. Ultimately, the company used a Ruby on Rails backend with an HTML5 web app as their choice of technology.

Advice from a founder: don’t hide your idea

The first thing most people do when they believe they have an innovative idea is they shut their mouth in fear of someone stealing the idea. Senyard said that this was his first instinct as well, but he credits Austin entrepreneur, Matt Curtin with inspiring him to loosen up, telling Senyard that only 1 in 100 people will try to steal the idea.

With that knowledge, Senyard said he began “getting out there” and advises innovators to “socialize” their idea, and talk to others about it to gain insight as to how to make the product better, or find the missing piece to their puzzle, or to find co-founders or coding talent. Senyard advises startup founders to go to every happy hour possible in their city, and to get on the scene and talk to as many people as possible about that brilliant idea.

What this entrepreneur loses sleep over

It is well known that entrepreneurs are frequently perfectionists, and most lose sleep over one company pain point or another. Senyard was honest with us in sharing that his lost sleep is mainly over seeking funding. In pitching to raise money, investors typically want the company to have an army of investors, but Vivogig has a very small team and needs funding to expand the team – a common catch-22 for startup founders.

The company has bootstrapped but is now on a mission to show investors how the company makes money, a feat that keeps any entrepreneur awake at night. Senyard has experienced setbacks, but is still running as fast as he can to expand the company so there is less strain on his personal and family life – yet another sleep killer for many entrepreneurs.

As the company continues to seek investment, they gained an injection of international attention at the recent South by Southwest festival, as they were part of the massive LaunchRock retreat where startups went to take a break from the festival and chill at a campground with acoustic live music (with Vivogig’s logo projected on all of the building walls nearby, of course). Additionally, they were part of the City of Austin’s showcase of local startups for international media to highlight up and coming tech startups hailing from Austin.

Vivogig has wider implications than simply music, and although the company seeks to go the route of investment, we can easily see Senyard’s company acquired for a hefty chunk of money – just think of all of the types of events the technology could apply to and create a legitimate showcase for music and music fans.