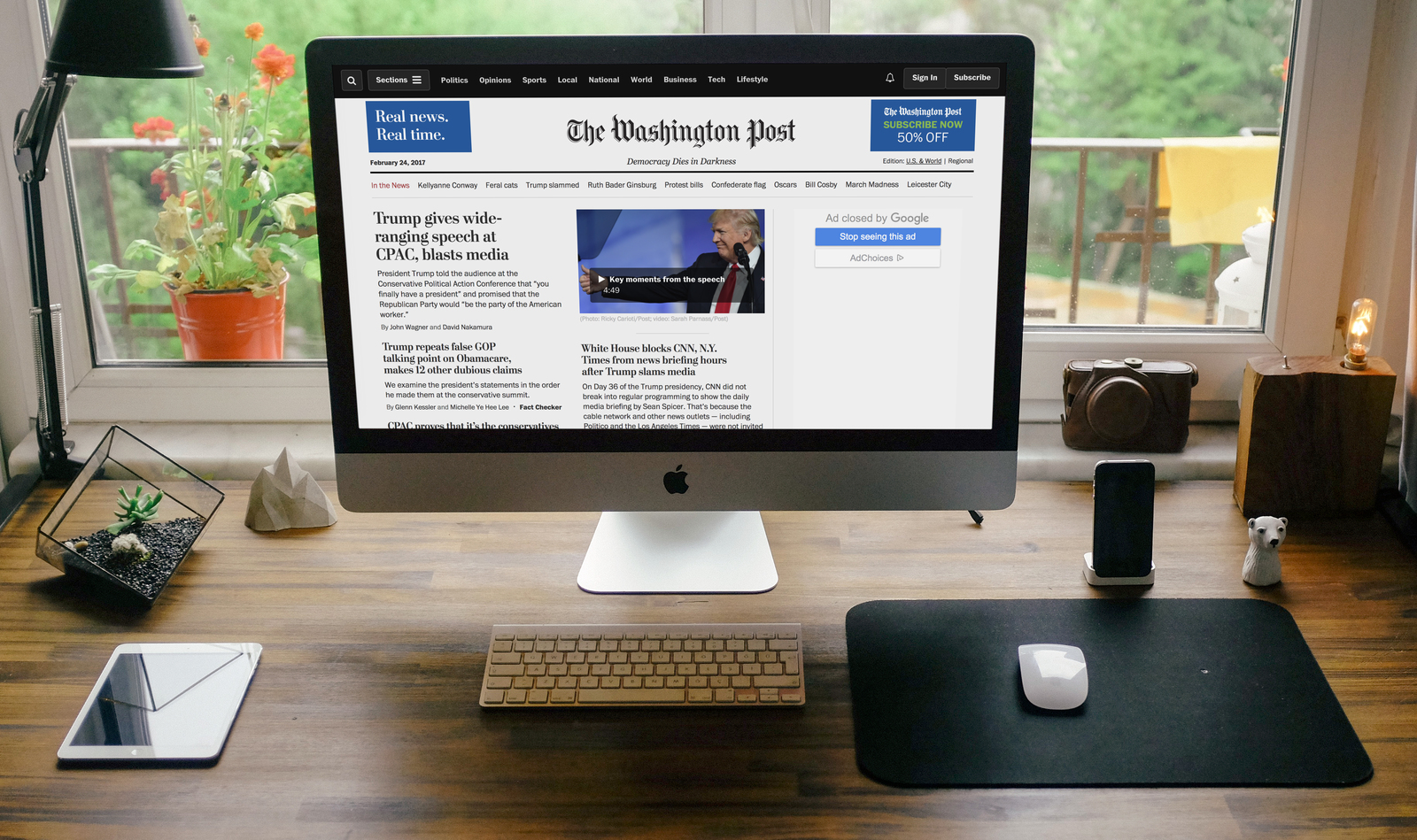 “Democracy Dies in Darkness” may sound like Batman’s battle cry, but now the slogan belongs to Jeff Bezos, CEO of Amazon.com and owner of The Washington Post. The paper has added this dramatic line to its online masthead, and people are freaking out.

Not a new saying

The motto has been used in the past by legendary Washington Post journalist and editor Bob Woodward, and even by Jeff Bezos himself when he was asked why he purchased the publication: “I think a lot of us believe this, that democracy dies in darkness, that certain institutions have a very important role in making sure that there is light. And I think The Washington Post has a seat, an important seat, to do that because we happen to be located here in the capital city of the United States of America.”

No besos from Bezos for Trump

Bezos and his paper were highly critical of President Trump in the months leading up to his November 2016 election, and beyond.

Bezos appeared to want to make nice with Trump immediately following his election last November, tweeting his congratulations and saying, “I for one give him my most open mind and wish him great success in his service to the country.” And Bezos called the then-President-elect’s tech summit last December “very productive.”

Then the immigration ban happened

When Trump’s controversial immigration ban went live, taking immediate effect and disrupting the lives of countless immigrants and refugees, Bezos was quick to speak out against the administration and offer support.

He offered his and (Seattle-based) Amazon.com’s full support to Washington State Attorney General Bob Ferguson's lawsuit against the immigration order.Click To Tweet

In an email to employees, Bezos was made his stance very clear: “This executive order is one we do not support . . . To our employees in the U.S. and around the world who may be directly affected by this order, I want you to know that the full extent of Amazon’s resources are behind you.”

And yet, the Post claims their intense new slogan (their first such principles-based slogan ever) is not at all in reaction to Trump’s election or actions. “We thought it would be a good, concise value statement that conveys who we are to the many millions of readers who have come to us for the first time over the last year,” said Post spokesperson Kris Coratti. “We started with our newest readers on Snapchat, and plan to roll it out on our other platforms in the coming weeks.”

Take a moment to digest the fact that “Democracy Dies in Darkeness,” a line with such gravity, history and strong intention, was debuted on Snapchat.

The world is changing. And not just the social media world – we’ve never had a president so passionately critical of the media, and the Post has been a frequent target of Trump’s accusations of “fake news.”

Some are hopeful that Trump’s War on Media will force journalists to maintain a higher-than-ever level of journalistic integrity and vigilance. Whatever happens, we’ll always have Twitter to tell it like it is:

The Night is Dark and Full of Terrors

“Democracy Dies in Darkness” is only a little better than “Hold me, Anakin, like you did by the lake on Naboo!”

The best thing about the Washington Post’s new “Democracy Dies in Darkness” slogan is the story about Lindsay Lohan directly under it pic.twitter.com/8hH0FhZCeU

Even before the pandemic, meetings where everyone was corporally present were becoming less frequent. With technologies allowing for Jim to “conference in” from the east coast and Judy to “video in” from the west, computer-mediated meetings have been becoming the norm for quite some time. This has become even more true over the last few years, both due to the pandemic and due to new technologies such as ZipMessage. What’s that, you ask? Let’s ask the expert. “It’s a video messaging tool made for replacing live meetings with asynchronous conversations,” explained founder Brian Casel in his tutorial video of ZipMessage.

The tool is designed to create video, voice, and screen conversations without live meetings. It’s described as async video messaging software, made for remote work.

First, Zoom fatigue is a real thing. ZipMessage states that “your team craves the space for the high-value deep work.”

Second, great ideas are bound to get lost in these spaces. It’s impossible to retain each item being shared, even if taking notes.

Third, email doesn’t fully cut it. Typed messages don’t always convey the full message. With ZipMessage, you can still type your thoughts, but you also have the option of recording a video and sharing attachments.

The conversation about that meeting topic is kept to one page in a back-and-forth, threaded format. Anyone with a link can join in on the conversation without anything to download, install, or sign up for.

This allows you to talk in real-time while giving the opportunity to go back and recap what may have been missed the first time around. In addition to conversation pages and the face/voice/screen/text options, ZipMessage offers intake forms and the ability to go public or private.

This isn’t only useful for communicating with your team, but it can be used to share information with customers, as well.