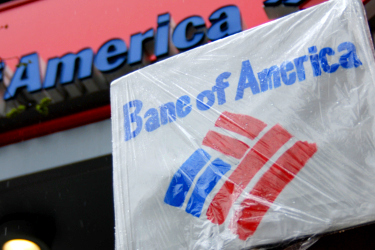 In light of an upcoming stress test from the Federal Reserve and Bank of America CEO Brian Moynihan’s quest to reduce risk across all credit lines as well as raise capital, the bank is cutting off lines of credit to some small businesses, demanding their balances be paid in full, according to the Los Angeles Times.

While Bank of America claims they notified borrowers up to a year ago that their loans would be called due or that they would have to pay at an accelerated rate at a higher rate, dozens of businesses told The Times that they never got notification in advance, only a notice that their business loan is now due. Additionally, borrowers will be given annual reviews and fees, along with reductions in the maximum amount of credit they can access.

According to the November Small Business Optimism Index from the National Federation of Independent Business, 34 percent of small business owners reported borrowing on a regular basis, up 4 percent from October, with one in ten reporting that loans were more difficult to obtain than their last attempt.

Small business owner, Babak Zahabizadeh told The Times he has already cut back on more than half of his staff throughout the recession and was recently notified that the $96,000 debt must be repaid in full before the end of January. A Bank of America loan officer offered a two year repayment plan at 12 percent interest as the alternative which he said is not only unaffordable, but is ten times more per month than he currently pays. His offer to double his monthly payments was rejected.

“We put in some standard practices for a very small percentage of customers – such as a maturity date and an annual renewal process – to better align the terms and conditions of these credit agreements with those of our current line of credit products,” Bank of America spokesperson, Jefferson George said in a statement, adding that the Times story is simply “speculation” and they are not cutting credit lines across the board, only a small portion.

There is no word on how many business have been impacted and we have not independently verified the credit worthiness of the businesses receiving notices, despite their current account standing.

Zahabizadeh is not alone – The Times interviewed other California business owners that claimed the same situation, like Kathleen Caid whose Antique Artistry Studio continued to run up their credit line which they were told would remain in place so long as they did not default, which she claims they have not. Bank of America says that her credit-line debt of $80,000, is due in May.

Bank of America has several commercials (like the one below) that promote their dedication to small businesses which they say they maintain. Many business owners are saying they understand a tightening of credit but not severing credit lines and calling them due. When asked how he would react as a small business owner if Bank of America called his loans due, JobCannon.com CEO Matt Genovese said his message to the bank would be, “Thanks for being my partner, partner.”