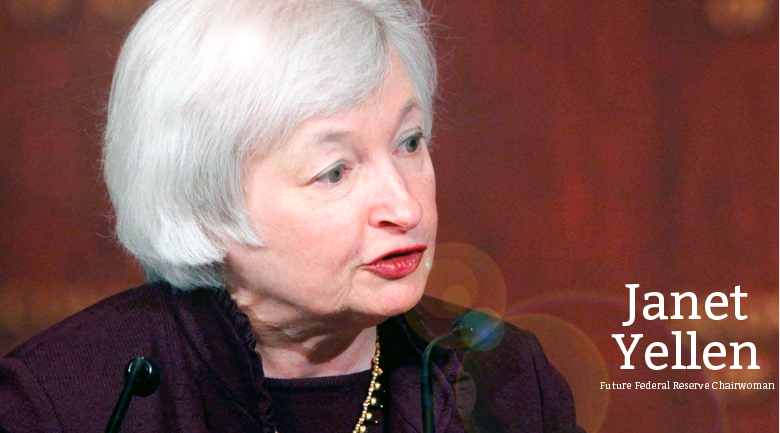 Meet Janet Yellen, the next Bernanke but probably better

President Obama’s Council of Economic Adviser and Former Treasury Secretary Larry Summers sent a letter to the President this weekend, withdrawing from the race to become the next Federal Reserve Chairman, resulting in the White House issuing a statement today that current Vice Chairwoman of the Board of Governors of the Federal Reserve, Janet Yellen would be nominated to replace Ben Bernanke when his term ends in January 2014.

Some claim Summers withdrew because it was made clear the Administration wanted to nominate a woman, while others point to the unlikelihood that he would have been confirmed, given vocal opposition, namely from Senator Jon Tester who sits on the Senate Banking Committee, among others who criticized Summers’ friendliness with Wall Street.

In contrast, Yellen is favored for her consistent position that regulators have the power to police but that banks should fortify themselves against economic undulations. Yellen will likely continue most of Bernanke’s policies, having been a major part of formulating many of them, and is credited for pushing Bernanke to think creatively to stimulate the economy.

Most impressive about Yellen is her crystal ball – according to The Wall Street Journal, between 2009 and 2012, of 700 predictions made in speeches and congressional testimony by 14 Fed policymakers, Yellen was the most accurate of all, even warning of the real estate bubble in 2005, when doing so was an extremely unpopular position to hold.

Additionally, Yellen appears to be more independent than Summers would have been, and with the White House stuttering as they nominate her, it appears she is not the lapdog the Administration had hoped for, but will not likely shift policy too far from their current state.

Over the years, Yellen has held the following positions:

Additionally, she has served as: