Survey results from the National Association of Realtors (NAR) along with analysis of historic credit scores and loan performance have the trade group noting that home sales could be considerably higher if lending was returned to “reasonably safe and sound lending standards,” adding that in addition to home sales improving, it would also create new jobs.

Dr. Lawrence Yun, NAR chief economist, said there would be enormous benefits to the U.S. economy if mortgage lending conditions return to normal. “Sensible lending standards would permit 500,000 to 700,000 additional home sales in the coming year. The economic activity created through these additional home sales would add 250,000 to 350,000 jobs in related trades and services almost immediately, and without a cost impact.”

Survey respondents indicate that the “unreasonably tight credit conditions” are continuing, lenders are “taking too long” to approve applications, and that the information required by lenders from borrowers “is excessive.” Some frustrated respondents cited that lenders appear to be focusing only on loans to individuals with the highest credit score.

So, in addition to existing tight lending conditions, the sentiment in the industry is that lenders may be cherry picking and prioritizing loans, inadvertently tightening credit conditions even more.

The NAR notes that profits in the financial industry have climbed back strongly to pre-recession levels, yet “lending standards still remain unreasonably tight.”

Dr. Yun said all it takes is a willingness to recognize that market conditions have turned in the wake of an over-correction in home prices, with all of the price measures now showing sustained gains.

“There is an unnecessarily high level of risk aversion among mortgage lenders and regulators, although many are sitting on large volumes of cash which could go a long way toward speeding our economic recovery,” said Dr. Yun. “A loosening of the overly restrictive lending standards is very much in order.”

In 2011, about 75 percent of total loans purchased by Fannie Mae and Freddie Mac, which are now a smaller market share, had credit scores of 740 or above.

The NAR notes a similar pattern for FHA loans. The Office of the Comptroller of the Currency has defined a prime loan as having a FICO score of 660 and above. However, the average FICO score for denied applications on FHA loans was 669 in May of this year, well above the 656 average for loans actually originated in 2001.

Loan performance over the past decade shows the 12-month default rate averaged just under 0.4 percent of mortgages in 2002 and 2003, which is considered normal. Twelve-month default rates peaked in 2007 at 3.0 percent for Fannie Mae loans and 2.5 percent for Freddie Mac loans, clearly showing the devastating impact of risky mortgages. 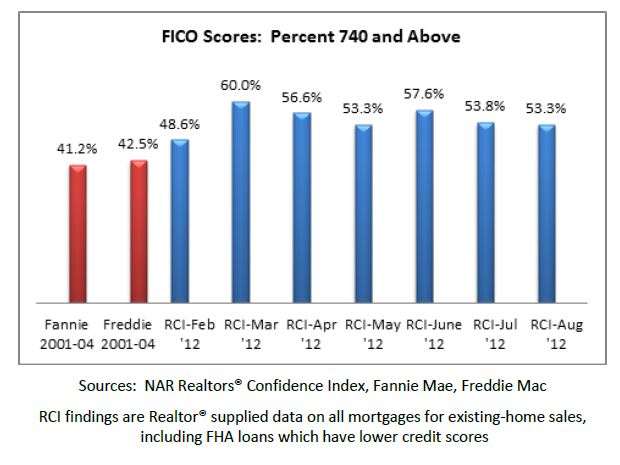 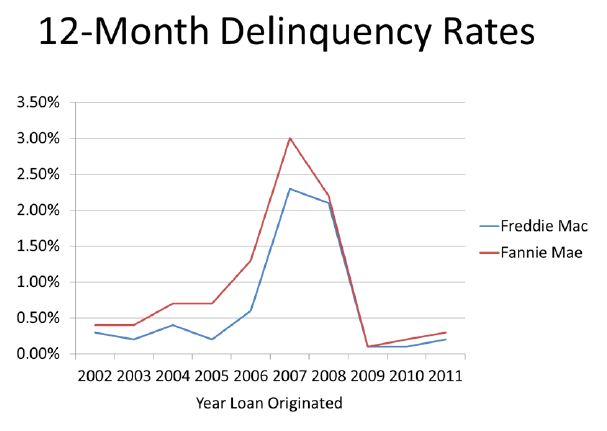 Home buyers in recent years have been “highly successful”

Dr. Yun said home buyers in recent years have been highly successful. Since 2009, the 12-month default rates have been abnormally low, and Fannie Mae default rates have averaged 0.2 percent while Freddie Mac’s averaged 0.1 percent, which are notable given higher unemployment in the timeframe.
Under normal conditions, existing-home sales should be in the range of 5.0 to 5.5 million.

“Sales this year are projected to rise 8 to 10 percent,” said Dr. Yun. “Although welcoming, this still represents a sub-par performance of about 4.6 million sales. These findings show we need to return to the sound underwriting standards that existed before the aberrations of the housing boom and bust cycle, and thoroughly re-examine current and impending regulatory rules that may cause excessively tight standards.”