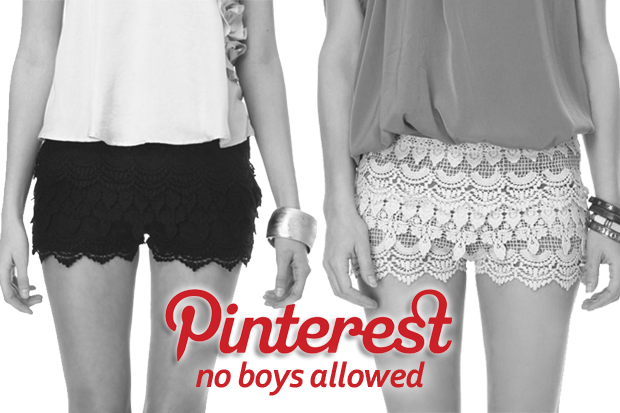 For months, AGBeat has led the conversation about Pinterest, introducing the visual bookmarking site to you last fall, showing you tips and tricks and how to use it for business, but one question plagues the skyrocketing social network – is there a place for men on Pinterest? Our knee-jerk reaction is annoyance that of course men are welcomed, in fact, 30 percent of AGBeat’s Pinterest followers are male, and 35 percent of my personal Pinterest account followers are men, and I would add that the men in our networks are extremely active, moreso than most of the women. So why the idea that Pinterest is a lady site?

First, the site is pink and red and the font is a charcoal grey instead of black. Very feminine. Second, even after achieving 10 million monthly users, the about page still reads, “Pinterest lets you organize and share all the beautiful things you find on the web. People use pinboards to plan their weddings, decorate their homes, and organize their favorite recipes.” Seriously, Pinterest? Why not just place a sign like the one designed above that shows hot chicks that says “no boys allowed” on the landing page!?

What is most bothersome is not that Pinterest continues to push toward a niche, there is nothing wrong with targeting a demographic, but for tech bloggers to perpetuate that it is a lady site, as is often done with a condescending tone, as in “oh look at the cute housewives with tiny brains pinning pictures of fancy things they’ll never have.” Yes, that is an exaggeration, but it is very similar to what has come up in personal conversations. The assertion by bloggers is almost that the male users, especially creatives, are feminine and belong in the ladies’ restroom. Intolerable.

Meanwhile, brands are quietly taking the site by storm and not exactly in a stupid housewife way, but in ways that crowdsource products and projects, research and connect with consumers, and brand content and ideas. While the site may believe itself to be feminine, one in three of our connections would argue otherwise.

Pinterest has a real problem, and not because of their less-than-upfront revenue stream of swapping out your links with their own affiliate links. The real problem is that the team is not out front in any way. The team has no meaningful social media outreach, nor a meaningful press outreach, and as users reach out to ask questions or make suggestions, they remain quiet – look at how many stories have been written by us and other news outlets that cite Pinterest had no comment or failed to respond to any email contacts. This is a communications problem with Pinterest that could easily be solved, even if to simply assuage fans and keep them on board – remember, as anything find success, it immediately finds its haters because people like to have discovered tools yet abandon them when they go mainstream.

Marketing Manager Eugene Hsu, who formerly worked at the Cheezburger Network and Challenge Games (Zynga) wrote a blog today entitled “Pinterest hates men” and points out some unseen potholes that lie ahead for Pinterest. “If Pinterest does not hate men, it should. Pinterest doesn’t need to kick out the men, but they need to keep the site “pretty” and “clean” to ensure they don’t lose their strongest demographic and their future to monetize off of that audience.”

Hsu also noted, “As the popularity on Pinterest grows, more men will sign-up for this site, and that will change content from women-only into more PG-rated tumblr content. Likely teenage boys will finally hit the site realizing that all the women have gone to Pinterest, and then there will be some serious issues with signal to noise ratios and NSFW content. Pinterest better have some better segmentation and filter mechanisms in-place soon so they can maintain their core audience.”

Yes, Pinterest was originally targeting women, but their user culture has determined that it is far more useful than for just pinning wedding dresses. Pinterest has a communications problem in that they have no strategy and I would question if they even have a communications staff. They are quiet and many find that to be off-putting and indicative of deceptiveness. They are ignoring their user growth and continuing to cater to women which is fine, it is there prerogative as a private company, but their growth we are all praising is limited if user behavior is ignored.

Will these problems kill Pinterest? No. Will we leave Pinterest because they are silent, poor communicators that appear to value their own methods over what their users are asking for? No. Will men eventually flock to Pinterest despite the pink background and bloggers implying it’s a site for housewives? Yes. We look forward to the growth of Pinterest, we use it every day, and we really enjoy it professionally and personally, but the long term growth is limited by the Wizard of Oz curtain the company has put themselves behind, especially when it comes to male users.