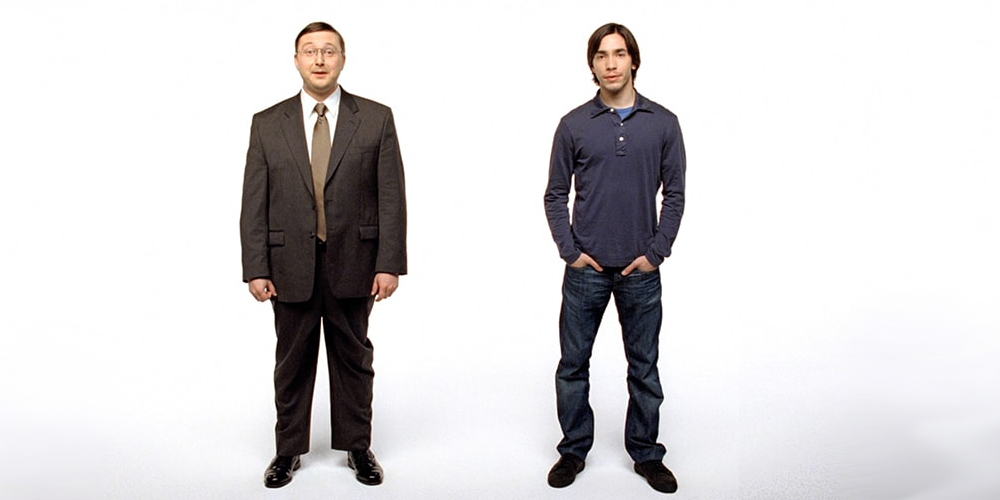 Apple did a thing and everyone had to report on it because it’s Apple doing it, but conveniently it doesn’t really matter what that thing was or is or will be because the real good news here is that PC GUY IS BACK. (If you need to know about M1 chips or whatever you can go here.)

The “Get A Mac” series of commercials ran from 2006 to 2009 and were pretty much the best Odd Couple buddy-buddy frenemy advertisements of their time (with Adweek calling it the best advertising campaign of the decade for 2001-2010). You had the personification of uncool utilitarianism throwing shade at the slick paragon of hip self-assured nonchalance, and it all clearly highlighted the stark difference between the two.

Where once laptops and computers were thought of as relegated to insular communities, we had a movement that sold the idea that it was cool to carry your technology so proudly and openly, while also stressing how the simplicity and effortless user friendliness made it accessible and appealing. And it definitely worked – Apple had an increase of 39% in sales for the fiscal year ending September 2006. (Wow it was that long ago?)

But I’m here to talk about PC Guy. Played by John Hodgman – a successful writer, editor, comedian, television personality, and actor – he brought a level of panache and subtle humor to the role that was brilliant. As PC Guy, he’s annoyed, annoying, slightly rebellious, stubborn, acerbic, insistent, and flaccidly angry. But he’s doing it all with a slight smirk and cocky half smile, saying things even he probably doesn’t believe, and wants us so desperately to agree to.

In the new commercial, he decries that battery life isn’t useful. “Plug it in!” he remarks. “Where you going?” (To be fair, that’s a fantastically relevant question right now – my laptop is boring an impression into my desk’s wooden top.) His entire strategy is to take his weaknesses and tell us they are GREAT.

It’s like he knows his time is past (at least for the sake of sales-argument here – PCs are absolutely useful in the tech landscape), like a dad joke-cracking dad who can’t accept that his kids will beat him in basketball one day. He knows he’s old and tired, but he’s still chugging along, still sees himself as a shining Adonis in the mirror, and can still totally crack out some totally sweet spreadsheets.

Does this setup work without Justin Long? I emphatically say yes. Being smug can be fun and funny, but it’s hard to be smug and the straight man at the same time – they are inherently opposite motivations and incompatible attitudes.

And really, PC Guy is the heart of the commercial – all the humor and jokes come at his expense and centered around literally everything he does, says, and believes. Honestly, it always felt like the Mac was just interrupting for the sake of reminding us he was there; his counterpart was the true star, and I always wanted more of him. I could absolutely watch someone try to convince me that being loud is acceptable, and that he can still probably outrun me in a hundred yard dash (even though it’s clear he can’t). Just let Hodgman stand around and say ridiculous things – I am here for it.

There’s no indication at the moment if PC Guy will stick around. I’m really crossing my fingers. Apple’s move toward their ARM-based M1 chip makes it even funnier from a nerdy perspective – they’ve introduced a chipset that sets them even further away from PC architecture altogether. So, in that sense, it is highly, highly appropriate to resurrect these commercials – PC Guy sees his rival becoming even more removed, differentiated by an entirely new core. What better time than now to let him rant about a guy he loves to hate and hates to love? Mac got a new chapter in life and PC Guy knows it.

Look – Adult Swim brought Samurai Jack back after 14 years, I think it’s fine for Apple to bring back the Bland Beige Bomber himself. Yo, Dell, hit up that one kid; I think you guys still make computers…

P.S. If you haven’t, please watch Bored to Death. Aside from all the actors perfectly cast for their roles, John Hodgman plays an incredibly pompous book critic who also functions as a taskrabbit for his maniacal boss. He really excels in weasely snide smarty pants parts, and his character is arguably a more fleshed out PC Guy. Highly underrated show.

In this article:apple, commercials, Marketing, opinion, PC guy, The News