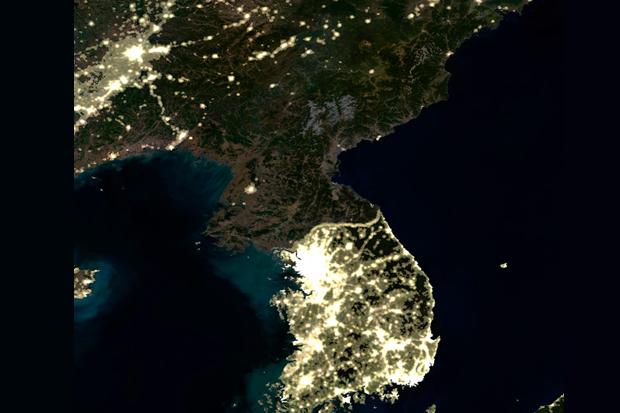 For the umpteenth millionth time, I read someone scolding business owners and investors in general about their innate greed. Seems the only reason they started their business or invested their capital was to make money — wait for it — for themselves. The bastards.

What they fail to understand is that all greed isn’t equal.

What these yahoos fail to fathom is that their greed for producers’ money isn’t the same, nor does it have the same consequences as does a business owner’s or investor’s greed for profits. The reason is that the taker’s greed merely transfers wealth, almost always via some level of force, from one person/business to them. However, when a business’s greed is rewarded with more and more profits, new wealth is created.

And there it is. The wealth is then spread to the new employees who now have a job. Who’re now payin’ taxes. Who’re now buying things like cars and houses.

Ever seen a shot of Korea at night, north and south, via satellite? It’s an awesomely instructive illustration of both kinds of greed. North Korea is virtually blacked out, except for the Palace, which is lit up like a Christmas tree. In a Taker Nation, it’s always the elites who get the goodies, while everyone else scuttles around in the dark.

Meanwhile, South Korea looks like one giant Disneyland on a clear summer Saturday night. One lives on the greed for profits which creates new wealth for everyone willing to pull their own weight. The other foolishly plays the zero sum game, until everybody ends up with — again, wait for it — zero.

Problem is, history shows us there are basically two kinds of takers. Thugs, who simply don’t care, they’re gonna take the other guy’s stuff, regardless. The other is simply ignorant of the completely predictable consequences of their actions. They see a goose layin’ golden eggs, and they want ‘their share’. So they take it. Pretty soon the owners of all those geese begin to disappear.

This is why North Korea is dark unless the sun is out. It’s why Cuba is the way it is. It’s why East Germany was so poor, while across from the Thug Taker’s Wall, West Germany was thriving. The golden geese pretty much fled to West Germany as they could. Since the thugs were thrown out, ALL of Germany became producers. Wealth was created and the the poverty and hunger of East Germany was cast upon the trash heap of history.

Do you prefer the brand leading to wealth creation? Or are you doomed to eventually live in darkness?