Portrait of a debate, photo by M. Holland.

Few things are more irritating in real estate than when someone unjustly brings up the dreaded phrase, “if we get sued over this,” people who name drop (I promise I only do this when absolutely and totally necessary), or a person who listens with their answer running.

There are endless rules, laws, Codes, and Cannons that we as agents and Realtors must follow and abide by. The majority of us follow them, and we do not knowingly go out to break them. Therefore, when negotiating contracts, getting into verbal altercations over issues of law that can be easily be verified is about the most ridiculous thing that can happen during a deal.

It’s some kind of ego trip that we, as agents, think we are always right, or we think our bosses are always right. Anyone who has spent a few years in real estate, or who has done a significant amount of transactions will usually agree that things should be done a certain way- the right way. Two agents’ version of what is right can vary.

A law may be interpreted differently, training could have been decades ago versus a few years ago, or a company’s policies can be different, but still within the law. Of course this can lead to substantial tension during negotiations.

How the “s” word heightens tensions

The tension can certainly be heightened when one agent brings up the possibility of being sued. When the really bad “s” word is talked about, most of us do one of two things- hang up the phone, or start defending ourselves.

I have had the privilege of working for and with some of the brightest and best in real estate during my career, not to mention taking continuing education classes from them, and the privilege of being the daughter of an instructor and broker as well. These people have forgotten more about real estate than most of us will ever hope to know.

Insinuations of being sued

When another agent happens to be incorrect, yet is insinuating we may be sued over something, the insinuation is often based on the advice of their own manager or broker who also has been around forever, and is knowledgeable, respected, and so on, because of course, this will also be brought into the discussion.

Attacking as a defense is a bad idea

Usually, none of this ever makes it from brain to mouth, thankfully, as it would just be a reason to be labeled some kind of nutjob (or another more unfavorable term). Going into attack mode as a form of defending oneself, typically, is not a good idea. Trying to explain why one is correct, with facts to back it up, is usually the best approach (assuming the other person is not listening with their answer running).

Unfortunately, when things get heated, at least one person involved in a disagreement, normally can’t shut up for two seconds to actually comprehend what the other is saying. Someone in the discussion will be running their mouths endlessly about why they are right. And while the other person may have a response, and even stated so, the other party hasn’t heard it, because they are still talking about being sued, and how this, that, and the other thing.

Tip: move the conversation to email

Email can be your BFF here. By emailing links to supporting documents, not only do we get the annoying chatterer off the phone, we prove our point, and end the discussion. Case closed, pun intended. And, for the record, I am firm believer that no one who has ever been closer to a courtroom than a Law & Order episode should even think of saying anything to do with being sued over a transaction, especially if they don’t know what the hell they are talking about.

In this article:News, real estate ethics 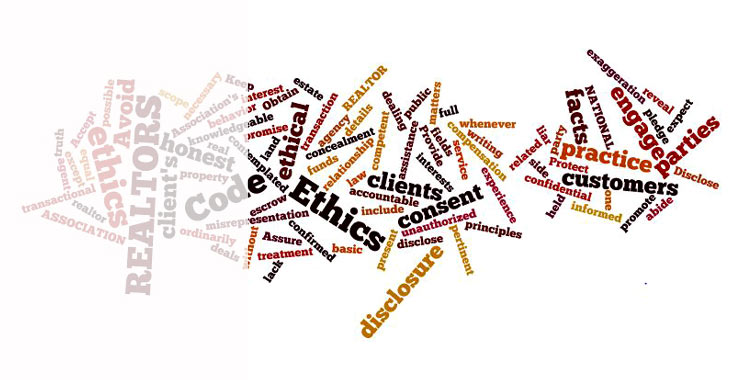 The problem with a self-policing industry: you have to be a narc

Ethics violations in the real estate industry can make or break a Realtor's career, depending on the severity, so it would stand to reason...