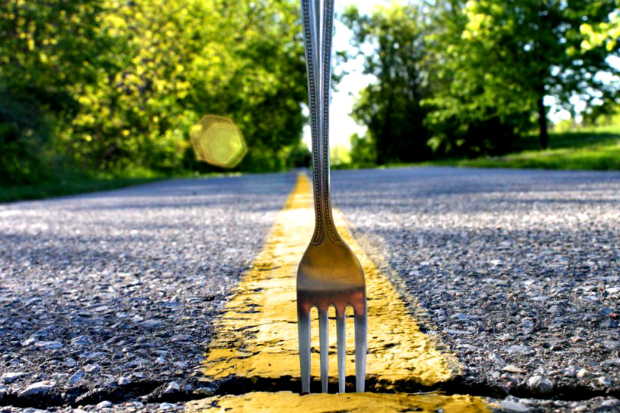 As 2012 is about to enter the room, I’m beginning to get a whiff of major road forking up ahead. The good news is I don’t think we reach that fork ’til at least the first Wednesday morning of November. For now, let’s just say 2012, I’m thinkin’ cruise control on the Status Quo Highway. The country is gonna choose what ‘episode’ they wanna watch the next four years. (Love mixed metaphors.)

What does that really mean?

Sure, ‘It’s the economy, stoopid!’ still applies — big time. But during an election year, those lookin’ for votes tend to keep things the way they are, more or less. This is especially true if things aren’t all hunky dory, like now. The ones in the White House need to change the subject, or if that fails, at least blame someone else. Those not in the White House need the hunky doryless status quo to remain in place ’til they’re elected. Hence, cruise control.

On the first Wednesday of next November

First Wednesday next November — The new fork in the road — episode if you will — may begin to appear.

If it’s the ‘Four More Years’ episode awaiting us, the new fork might be a bit more of the same fork, though certainly not for long. The other half of that fork might be the deafening ‘OMG we’ve screwed the pooch!’ chorus from the Taker crowd, as they begin to recognize the inevitable consequences of their naiveté — or ignorant arrogance if they actually believed their own company line.

If Wednesday morning greets us with the ‘Nightmare is Finally Over’ episode, it could be a whole buncha wait ‘n see. Folks may wanna see if the new guys will indeed walk their talk. Once the rubber begins hittin’ the asphalt, the fork might begin takin’ shape. One half of it could be federal budget spending cuts, which could lead to increased confidence/optimism in what remains of the Producer crowd. That crowd though, probably won’t be convinced it’s safe to go back in the water, so to speak, ’til tax and regulation relief becomes a reality.

Where the forks lead

Happily, both roads in this fork lead to the same destination — economic recovery base upon OldSchool American economic principles. You know, work ethic, free enterprise, a sense of earning, not entitlement, and generally speaking, not goring the Producers ’til they decide to leave the country. (Oops, many already have. Maybe if this episode is playin’, they can be enticed to return — and bring back the jobs with ’em.)

The next time a government taxes, spends, and regulates its way to national economic prosperity will be the first. In my lifetime, though, it seems a large segment of us need to keep learning this lesson. The difference this time, maybe?

Wakin’ up to the ‘Four More Years’ episode may be the last fork in the road we ever see. At some point the music stops, and reality begins.

Lately that melody has had a Greek flavor to it. Their Takers STILL don’t get it. But they will when the new episode begins playin’, and the bus they’ve been on all these years is forced to take a different fork.

In this article:Economy, Real Estate