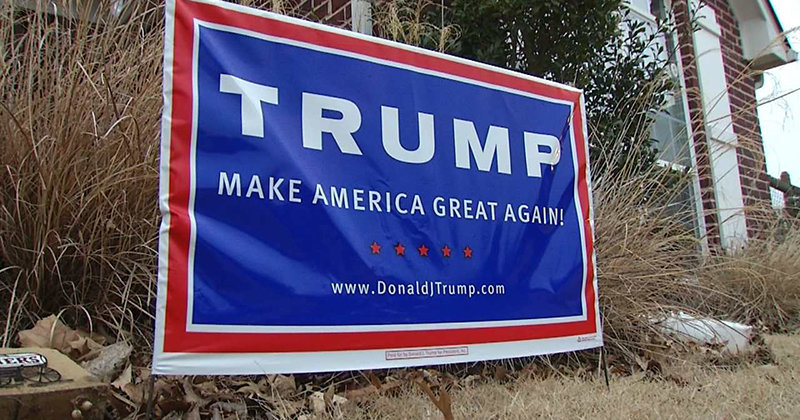 Let’s talk politics. I don’t care if you’re a Republican, Libertarian, Democrat, Progressive, or Independent. We need to have a civil discussion about the right to back the candidate of your choice. We don’t need to agree with our neighbors, but we should respect their property and voice.

What prompted this? A flag-burning in Burlington. A Vermont homeowner found his 2020 Trump flag burned and thrown on his porch. The flag was on private property. Yes, Vermont is a blue state. The homeowner is in a minority. But vandalism is unwarranted. A person should feel safe at his own home.

PBS reports that 79 percent of Americans are concerned about the negative tone of national politics.

Republicans, Democrats, and Independents are in agreement about this. Granted, it is usually extremists that cause violence and unrest, but we’re seeing more and more incidents.

The Vermont flag-burning is just the tip of the iceberg.

It was recently reported that Christine Blasey Ford is still receiving death threats. Ted Cruz and his family should be able to dine out with being accosted. You should be allowed to have a political sign in your yard without fear of being vandalized.

Some believe that the increased violence is due to the way President Trump conducts himself and/or the way the media presents the news.

Can we agree that everyone behaves badly in the political arena at some point? But the only one responsible for burning the homeowner’s flag is the one who actually did it.

Arguably, political stakes are high. What happens in Washington affects every person throughout the country, and sometimes, it has international effects. But we still have to live with each other. The attacks have to stop.

Attacking others for their personal political views isn’t likely to change their mind.

We should debate the issues.

We have to talk politics civilly to help our country move forward rather than retract into private non-concentric circles of safe spaces.

We can’t support violence and vandalism in the name of political rhetoric, be it from the top or the bottom. America is divided. It’s not due to politicians and journalists. It’s because Americans forgot to be respectful and courteous when disagreeing.

In this article:civility, politics, The News