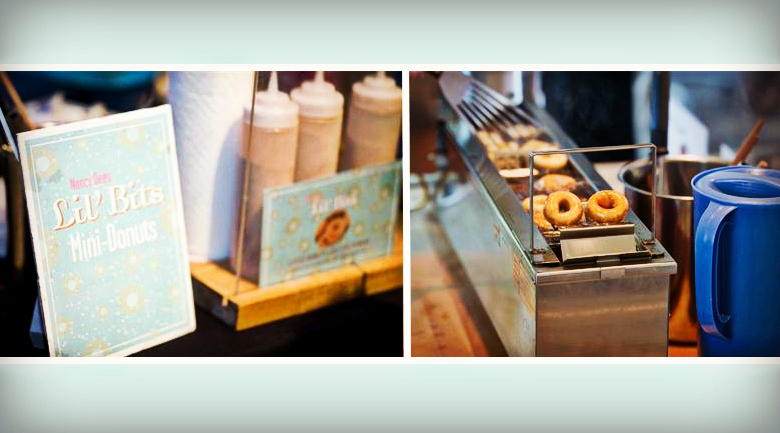 Get your salivary glands ready

As you read this, imagine the taste of mini donuts. Not the kind you get in a bag at the gas station after a long night of drinking, but of hand made, fresh mini donuts that are still warm and explode in your mouth with a sweetness that tastes like what can only be described as happiness.

Nancy Miller in Dallas, Texas is quickly becoming known as the donut queen of her city, and with each “Lil’ Bits Mini Donuts” popped into a mouth, another connection is made. Her product stands on its own and is quickly expanding her empire of mini donuts made in person at events across the city.

But donuts are bad for you, right?

[ba-pullquote align=”right”]A trans fat free, cholesterol free, low calorie surprise.[/ba-pullquote]As AG is headquartered in Austin, our first questions were, of course, about health to which Miller enthusiastically noted that her product only has 28 calories per donut, no trans fat, no cholestorol, and is hand made from all natural ingredients, carrying about a tenth of the calories of a candy bar. She adds that they are completely Kosher, and in the future, she is looking at adding a gluten free version to her lineup. 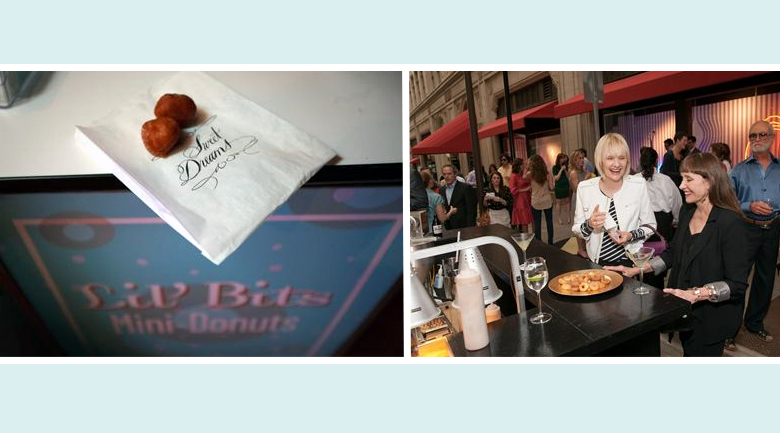 How Lil’ Bits Mini Donuts came to be

Miller didn’t inherit a family business, and she didn’t grow up dreaming of being a donut entrepreneur, nor was she famous for her donut making skills. She didn’t dream of tiny clouds made of donuts, and didn’t have a divine vision of her future with donuts, no, her path began more organically.

As a stay at home adoptive mother known in her personal circles for her homemade jellies, she needed to get her brain to work, so she bought and quickly consumed a book on entrepreneurialism. One of the ideas involved a donut machine which required a very small investment, and allowed her to bake around her childrens’ schedules as she was already accustomed to with her jellies.

A brief hiccup, then an explosive expansion

Five months later, Miller picked herself back up and became renewed when at her first event back in the saddle, she met an event organizer in charge of Nolan Ryan’s opening party for the Rangers, and was immediately booked. There, she was booked to be featured in the Dallas Cowboy’s stadium by Mike Rawlings who is a former Pizza Hut CEO, who has since become the Mayor of Dallas.

After getting her business in order, the referrals kept coming, but mostly, she impressed people in person with the fun setup and tasty product. She was then featured in a reception for wedding planners, and was then covered by D Magazine, both of which have generated a great deal of business for her.

Just last month, famed chef Dean Fearing said of Miller’s donut machine, “I want one of those for my house!” as he went wild eating several Lil’ Bits Mini Donuts at an event. Miller says people are mostly intrigued by the presentation as the machine makes 1,200 tiny donuts per hour, and she calls it the “miracle perfection machine” that staff constantly adds eight to at a time, with 16 cooking at all times.

Now, Miller is so busy that she has had to hire staff to run the operations, and has alleviated stress by removing the transactions at the point of sale, rather charges per person for events, which allows all staff to focus on the product and presentation.

[ba-pullquote align=”right”]”Miller says she is just getting started.”[/ba-pullquote]Miller has been so inspired by the explosive growth of her mini donuts brand that she has just launched a cotton candy line, and will soon be selling cotton candy syrups to events for bartenders to make specialty drinks, like Ginger Cotton Candy for a Ginger Martini. She wants to add organic sugars and flavors to her product line and later lollipops, sugar scrubs, candy apples and more – she says she is just getting started.

In this article:bootstrapping, Entrepreneurialism, entrepreneurship