It’s obvious that the world is digitizing. Books can now be read electronically, some of us keep in touch with friends and family via social media sites and texts versus phone calls and letters, and even our ways of raising and transferring money haven taken on digital characteristics.

In the past, business owners would go to banks or other traditional lenders to fill out an application for funding. Now, entrepreneurs can bypass the need to go through a financial institution and instead, crowdfund from investors, peers, friends, and family on digital crowdfunding platforms. As the digital crowd continues to flock towards these alternative funding sites, it’s quite possible that digital currencies such as Bitcoin could begin to play a larger role in this space.

Read also: Why Bitcoin is suddenly hot news after four years in existence 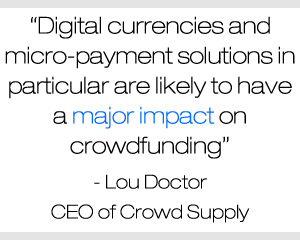 One of the reasons that Bitcoin is so popular is because it’s a digital currency that doesn’t have to be routed through a financial institution, and various project owners have their reasons for why this matters to them. This same sentiment holds true for entrepreneurs who would rather raise money via Kickstarter or Indiegogo as opposed to a bank or credit union.

By utilizing crowdfunding sites, project owners can bypass the red tape and long, strict approval processes often associated with a bank, and instead, persuade friends and peers to give money via a portal with the click of a mouse. With this method, entrepreneurs have more control over the date that they can start to receive funding – essentially only needing to post a pitch and business plan to an online community in order to persuade others to invest.

Sites such as CoinFunder have already specialized their crowdfunding capabilities by accepting Bitcoin donations only. Since crowdfunding and Bitcoin operate with no direct ties to a financial institution, it makes sense that more platforms may start to accept digital currency for projects that lend themselves to that form of funding.

Lou Doctor, CEO of Crowd Supply believes the two are a strong match. “Digital currencies and micro-payment solutions in particular are likely to have a major impact on crowdfunding,” Doctor tells AGBeat. “For example, transaction costs are on credit cards are currently so high, that someone trying to raise a modest amount of money from a large number of people (say $500 from 5,000 people) has no practical solution today. If individuals could effect a transfer of a few cents to an artist that is ‘giving away’ a song or video, the fund-raising potential could be enormous.”

There are talks around regulating Bitcoin, so that could potentially become another factor that crowdfunding sites would have to consider if they want to implement digital currency fundraising in the future. But as the space in general starts to lend itself to more digitized funding options that are independent from a financial lender, there’s a strong possibility that Bitcoin could start to play a bigger role.