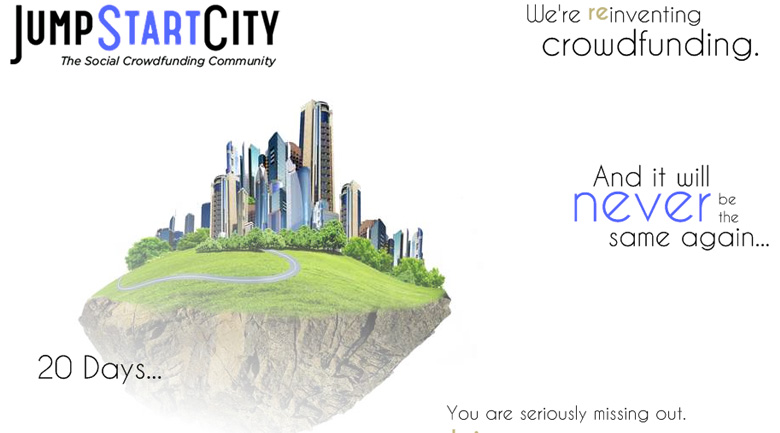 Jump Start City, founded by Billy Smith and Mark Baker, is a crowdfunding platform focused on the community of backers. The company will officially launch on June 1st as a platform to allow backers to become more involved in projects and take part in a community of crowdfunding enthusiasts.

First of all, what is crowdfunding?

Crowdfunding is the method of funding a project by raising small amounts of money from a large group of people, and the alternatives are already so broad and have grown so popular that the federal government is scrambling to regulate it.

One example of a crowdfunding project is an independent filmmaker who might place their project on a crowdfunding web site, with information about the film, as well as their background, in hopes of getting enough people interested to receive enough money to fund their film project.

How is Jump Start City different?

As Jump Start City tells AG Beat, “we have built a platform that is truly for the backers. The crowd is what makes crowdfunding work, so we’ve set up a community that welcomes them to take part in many different activites.”

This will include a community where backers can converse about current projects, as well as, a role in influencing the direction of the site. The backers voices will matter and the more active a backer is, the more influential their voice will become.

In addition to the backer focus, there are “a number of ways we’ve changed the crowdfunding process for creators” Jump Start City says, for example, the actual event of a project has been fundamentally changed. Jump Start City states that the biggest problem creators can face in crowdfunding is the ability to get their idea out to people; the marketing of their idea.

A lot of people have good intentions and high hopes of launching their project and receiving hundreds or even thousands of dollars overnight, but quickly lose momentum because their project does not receive enough attention. Jump Start City says, “the fundamental differences we have made to the funding process make this nearly impossible. No event will ever launch on Jump Start City that hasn’t has more than a fair shot at getting in front of a lot of people.” This is definitely a change from the sit-and-wait method some other crowdfunding platforms use.