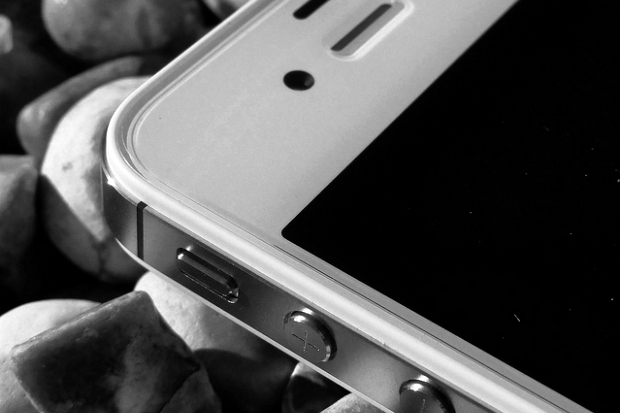 With fully 38 percent of all American smartphone owners using their phone to make a purchase at least once since they’ve owned their device, comScore is reporting that mobile shopping has gone mainstream. The most popular purchases on smartphones during the month of September included digital goods, clothing and accessories, tickets and daily deals.

“Fueled by smartphone adoption, mobile is becoming a central part in the shopping funnel for many consumers,” said Mark Donovan, comScore senior vice president for mobile. “In September we saw two-thirds of all smartphone owners perform shopping activities on their phones, including comparing products and prices, searching for coupons, taking product pictures or locating a retail store. Considering there are currently 90 million smartphone owners in the U.S., retailers without a well-developed mobile strategy are not only missing a tremendous opportunity with these customers but also risk becoming obsolete in the minds of these digital omnivores.”

What did they buy?

Digital goods were the most popular purchases which include eBooks, music, movies and entertainment with 47 percent of smartphone purchases buying these items. Clothing or accessories were bought directly from the retailer by 37 percent of smartphone purchasers with 35 percent buying event tickets. Just over one in three mobile purchasers bought gift certificates and daily deals from their device in September. 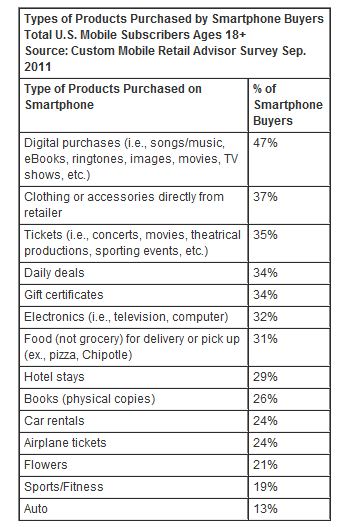 Where were they when the bought?

The most popular place to buy items from a smartphone was not on the go, rather 56 percent did so while at home, followed by 42 percent while out of the home or at work and 37 made purchases while traveling or commuting (with overlap between the three groups as smartphone users purchased more than once in many cases).

Just over a third of purchasers used their smartphone to make a purchase while in a store, which comScore says highlights “the increasingly important role mobile is playing in consumers’ brick and mortar retail experience, especially as a tool for real-time price and product comparisons.” 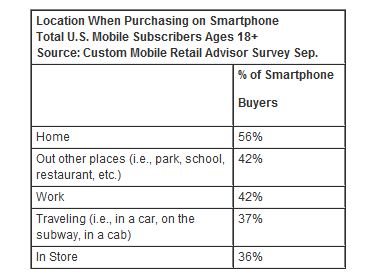 In this article:mobile shopping, smartphones, Technology