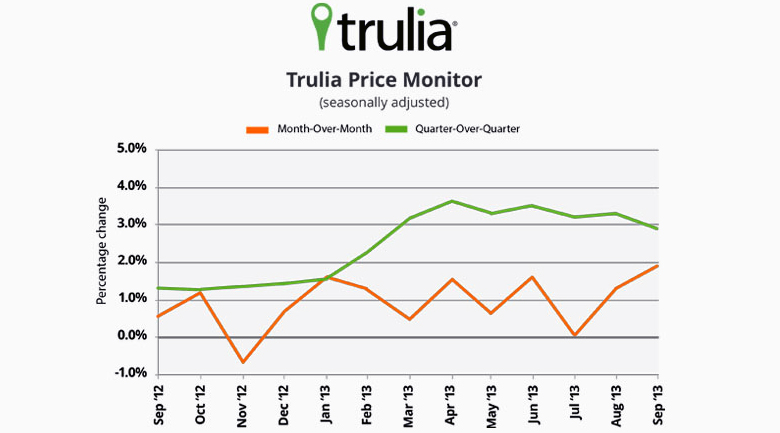 Although still technically recovering, housing has seen some hiccups of late, this time in the form of asking prices and rents, according to the September 2013 Trulia Price Monitor and Trulia Rent Monitor. Trulia reports that asking prices rose 2.0 percent in September compared to August, but notes that the quarter-over-quarter price gain of only 3.0 percent was the lowest quarterly increase since February.

Prices actually fell quarter-over-quarter in 11 of the 100 largest metros, including several in Florida and upstate New York, up from just 3 of 100 in June. Asking prices rose 11.5 percent over the last 12 months, but year-over-year changes should start to shrink in the coming months. At the metro level, 89 of the 100 largest metros had Q-o-Q price increases in September, down from 97 in June.

Price gains slowed in 68 percent of the largest metros, with California experiencing the most dramatic slowdowns, most apparent in Sacramento, Oakland, Orange County, and Los Angeles, where asking price gains had a slowdown of 2.0 percent or more, even though asking prices rose over 20 percent in these areas year-over-year. Atlanta was the only metro where prices are up at least 20 percent Y-o-Y and Q-o-Q price changes are accelerating significantly.

What is causing the slowdown?

Pointing to increasing mortgage rates, expanding inventory and declining investor activity as the cause of the recovery’s slowdown, the company also reports that the federal government shutdown has not affected prices yet, but a prolonged shutdown could hurt housing demand in areas reliant upon federal money. Trulia also states that in the unlikely event that hitting the debt ceiling later this month causes the government to stop paying its bills or – worst of all – default, the resulting financial panic could send the economy and the housing market into a tailspin.

“Asking home prices give us the first look at where home sale prices are headed, and they point to a slowdown,” said Dr. Jed Kolko, Trulia’s Chief Economist. “After rising rapidly in the first half of 2013, asking prices in two thirds of the largest metros are cooling. In fact, asking prices are falling – not just rising more slowly – in 11 of the 100 largest metros, the most markets to see prices slip in six months.”

Rents are rising, but at a slower pace

Nationally, rents rose 3.0 percent year-over-year in September, down from 3.9 percent in June. Locally, rent rose more slowly in September than in June in 18 of the 25 largest rental markets, including Seattle, Denver, and Houston. Trulia also notes that rents are rising fastest in the “artisan coffee belt” which includes Portland, Seattle, and San Francisco.