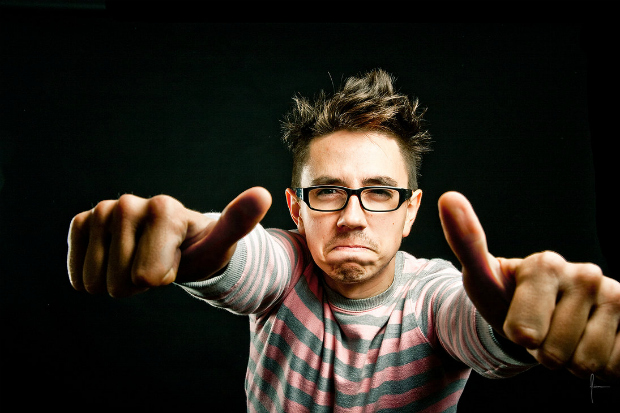 “Find the best real estate agent,” says freshly launched Realtor rating site, RatedAgent.com which says it is the “First-of-its-Kind Website” that offers transparency in the form of unedited feedback from consumer surveys. The system already has over 10,000 participating agents and has launched a pilot program with the California Association of Realtors, likely based on their March 2010 partnership with MLSListings, Inc. as they developed standards for agent reviews, seeking to give better controls over the information.

RatedAgent.com says they expect to have another 50,000 agent ratings with several hundred thousand reviews on the site within the next 90 days. It is free for consumers, opt-in for Realtors who are “held accountable through the Quality Service Assurance Survey© that is delivered by an independent research company to every client served.” Survey results cumulatively score agents on a scale of one to five and agents can opt to display their Customer Satisfaction Rating and summarized responses are published on an all or nothing basis rather than only opting to display positive reviews.

The company says it is unique because “RatedAgent.com offers unbiased agent ratings without the gimmicks and games you will find on other sites (agents being encouraged to invite friends and family to “stuff the ballot box”). The information presented here is rich, comprehensive and useful.” Zillow, Mountain of Agents, Trulia, AgentAquarium, Frankly Realty, and Redfin may not agree that it is the first ever or that it is the first to be unbiased, but the formula of all-or-nothing opt-in builds on the successes and failures of the aforementioned companies.

The downside and the caveat

The user interface is lacking, but it is the first iteration, so we have high hopes that the company will bring on user experience experts to take them to the next level. We also have high hopes that because this company is based on third party surveys, the data will be more rich than some of its competitors. Because it’s an annual subscription cost for agents rather than a per-transaction fee, they could do fairly well with Realtor participation.

The caveat, however, is that when you read the fine print, agents have “option to attend specialized training on how to deliver the best service in the industry and earn the QSC professional designation.” What is the QSC designation? Is it free? No, it is an established certification and when consumers do a search for an agent, they are fed RatedAgent.com data. Are they selling the designation through the ratings site? Sure. Are they requiring the certification in order for ratings to be featured? No, it is elective.

The link to the QSR certification

So how are agents found and what do consumers see? We did a search for Keller Williams agents and narrowed it down to Pennsylvania where two results came up. One was Kathleen Green in Beaver, PA. Green is also QSR certified and has the same ratings featured below on the QSR search page. It is possible that the company either piloted the program through their QSR certified agents, as it appears there are more responses for Green than say someone like Deborah Scheidt in neighboring West Lawn, PA who only has one review so far. It is unclear as if some have more reviews because they were part of a beta or not, but it appears that those with the certification have more reviews in the system.

Below is a sample of how some of the survey responses appear to consumers (we like that they even feature the hand written responses): 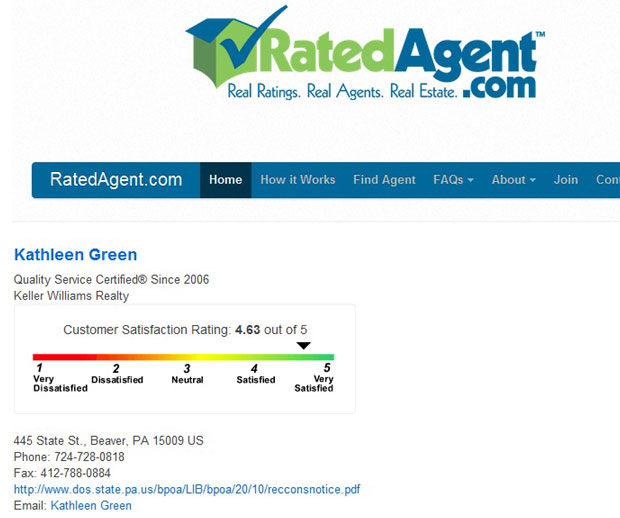 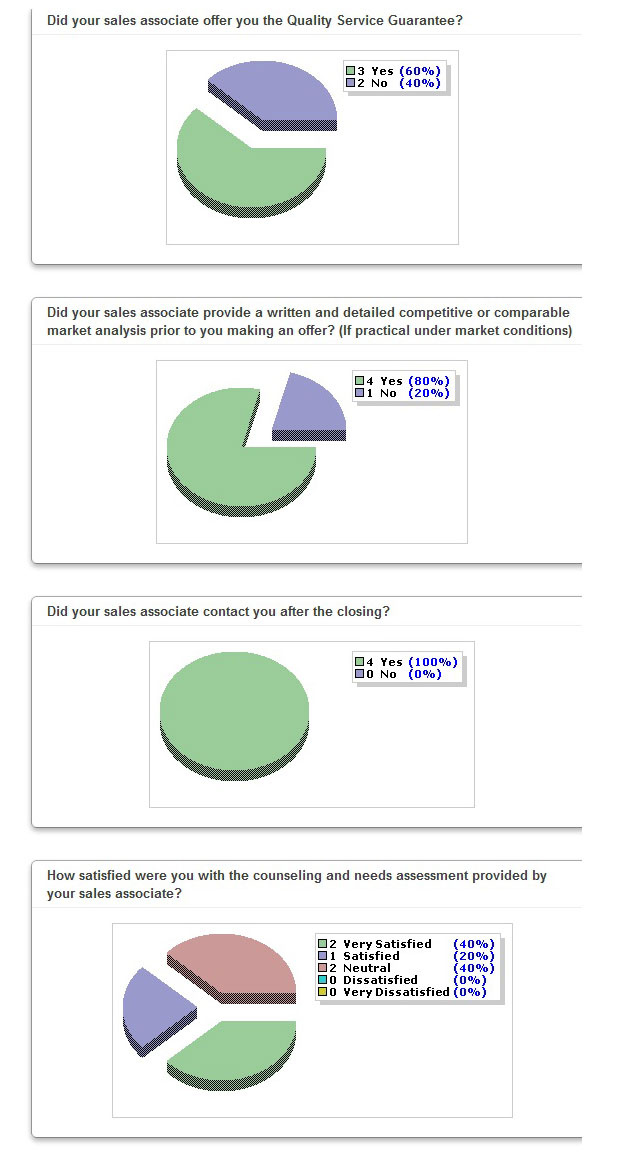 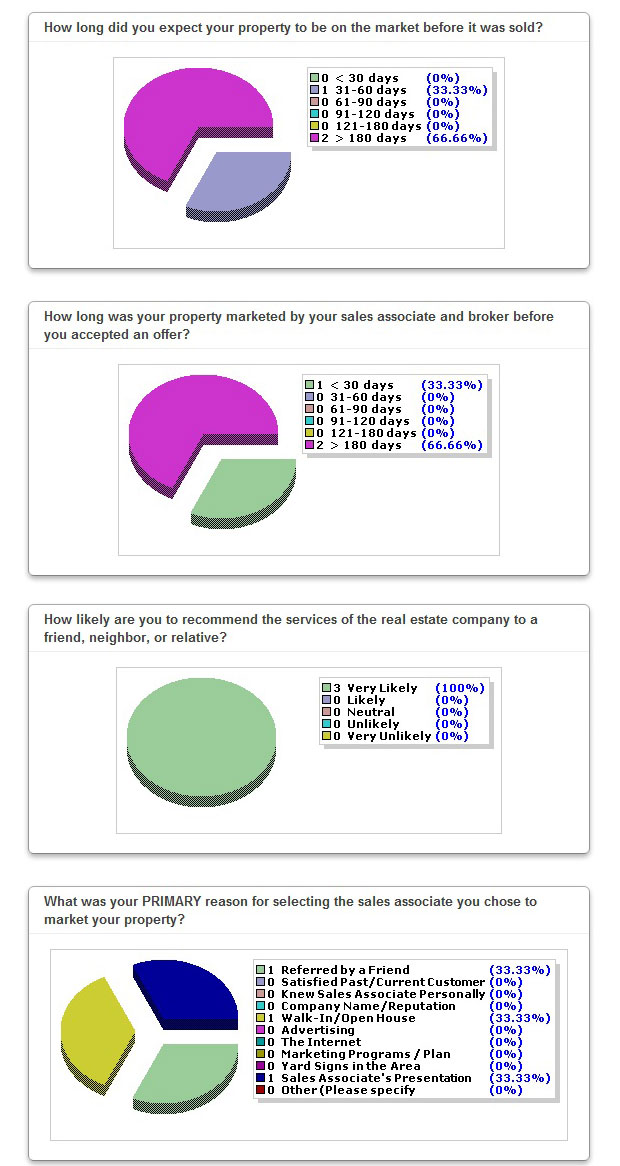 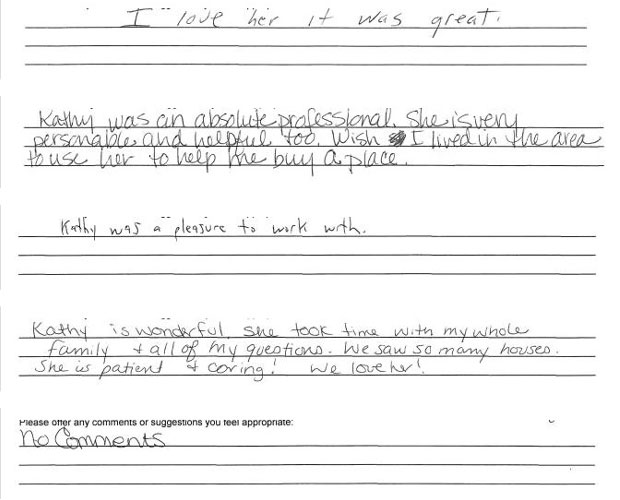 2010 prediction about ratings has come true

Last year, we made 20 predictions for real estate and technology spaces for 2011, one of which pertained to ratings. We said, “‘Realtor ratings’ will be a phrase you’ll be sick of in 2011. We’ll cover it here so you’re aware of it, but in 2011, we promise you’ll be tired of hearing about ratings as the remaining big dogs add ratings systems to their search sites.” The real estate search big dogs have added ratings and other companies have given it a shot as well.

Some of the long back story on Realtor ratings (click to read more about each):

Will RatedAgent.com be the one that consumers look to for agent research or will they stick to the sites they already know (Zillow, Trulia)? Will RatedAgent.com rise to the beauty and functionality of Redfin or Moutain of Agents?

In this article:News, realtor reviews