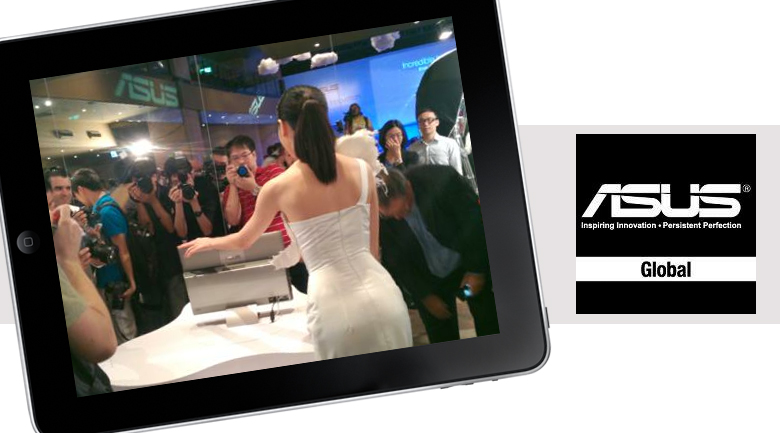 At the Computex 2012 convention, a photo of the new ASUS Transformer AIO hit Twitter, featuring an all-in-one PC computer with detachable screen that acts as a tablet. Technologists have been anxiously awaiting its unveiling, but at the conference, instead of the traditional “here it is!” type tweet, the ASUS Twitter account said of the photo above, “The rear looks pretty nice. So does the new Transformer AIO. #Computex2012 pic.twitter.com/ajafmuDk.”

The original tweet has since been removed, as has the original photo, but a cached version is still available online. In fact, the tweet has become somewhat viral at the convention, with many tweets using the “#Computex2012” hashtag pertaining to the ASUS slip up.

Immediately, social media channels exploded, accusing the company of being sexist and reinforcing that the industry slants toward men and is unfair towards women who contend with this sexist attitude as they enrich their careers. Many feel that it immediately unravels a lot of hard work by both sexes to advance equality in the tech industry.

While I personally am not offended at all (she does have a nice rear, and they were clearly being silly, not serious), it still struck a chord and many women and even men proclaimed they would not consider purchasing an ASUS product at any point in the future and hit their personal airwaves to let other people know that they should consider boycotting the brand as well.

The proper steps for any brand

ASUS took the proper steps by removing the tweet, but has failed to acknowledge it, especially on their Twitter handle. The company should immediately issue an explanation and apology to those who were offended. Sometimes when a brand makes a misstep, it is hard to see internally how something could be offensive, but it is not about what the internal culture is or whether or not a company understands the full implications of what they’ve said, but they should always make an attempt to publicly acknowledge that what they said struck a chord and that they did not mean it as it was taken.

Most brands will make some sort of mistake using social media, as the goal is to be more human, and what is more human than erring? When you or your brand make a mistake, do your best to apologize, even if you can’t understand why others would be offended, and simply add that type of behavior to your list of things not to say.

Know your audience, people – if Maxim Magazine tweeted this, no one would care, but because a corporation did, it matters. Again, I am not offended by the tweet in the slightest, but it does tell my daughter that her value is as a booth babe, not an engineer leading an international division, and while I don’t believe ASUS intended that as the message, they should undo the damage they’ve caused and set it right.

In this article:professionalism, sexism, Technology