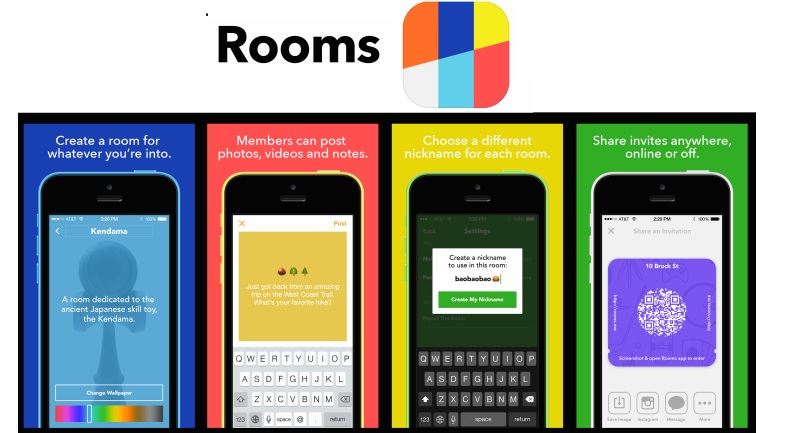 Facebook has released new iOS app called “Rooms.” If you ever spent time in an old-school AOL chat room, you should have a good idea of what Rooms is all about. Rooms lets you create places dedicated to what you’re interested in and to invite others that share your passions as well. I

t is a little bit like their current “groups” feature, but with a few additional tweaks. To join a room, users scan a 2D barcode, which can be shared across social platforms. This allows you to only invite people you want to, which is great for collaborating on specific projects and interests, but could be a pitfall for productivity as well.

Whomever is the moderator (whomever initiated the chat) controls the content and guest list. A room is a feed of photos, videos, and text – not too different from the one you have on Instagram or Facebook – with a topic determined by whoever created the room. Early users have already created rooms for everything from beat boxing videos to parkour to photos of home-cooked meals. It is all completely customizable, in order to best represent the user.

Is this unique? Not really

Of course, other apps for anonymous topic discussion exist, Reddit being on the best examples.  The main problem with these apps is the lack of content policing. Of course this opens up a whole new discussion, regarding why have an anonymous app if you cannot say what you want, but some users will use it as a platform for hate speech, violence, and bullying.

This is where Facebook hopes to bridge the ground between complete anonymity and removing the basic offending  threads of hate speech and the like through their community guidelines and content moderation.

Why Rooms? Jason Miller, Product Manager at Facebook, said in his blog post, “One of the magical things about the early days of the web was connecting to people who you would never encounter otherwise in your daily life…Forums, message boards and chatrooms were meeting places for people who didn’t necessarily share geographies or social connections, but had something in common.”

Rooms should allow you to focus on your own interests, rather than the Facebook Newsfeed, which focuses primarily on your friends, family, and co-worker’s interests.

How well will the moderation system work?

And then of course the question becomes how well with Facebook’s moderation system work? Who decides what is vulgar, graphic, too much, etc.? There were reports of Facebook removing breast cancer survivor images because they were too “graphic,” but leaving up graphic images of movie makeup artists and domestic violence campaigns. Everything is open to interpretation on the Internet, so it will be interesting to see how they implement the moderation process.

However it should also be noted, that Facebook could be party to a lawsuit over its Rooms app. As ValueWalk reports, there was already an app on the market, serving a very similar function. Only time will tell how the Rooms app will do and if people adapt it, or begin to question it as they did with the Messenger app.

Update: it appears Facebook may already be facing lawsuits for the new Rooms app. Stay tuned.