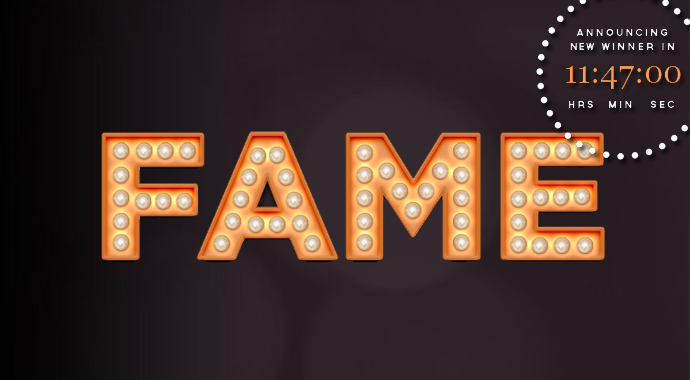 Fame is designed by New Yorker Adam Ludwin as a side project to give random users a gigantic follower count once a day. Users to to the Fame site, give it permission to access their Twitter account which enters them into a raffle with everyone else who connect, and daily, a random winner is chosen. The winner is automatically followed for the day by everyone who has entered the raffle.

The San Francisco Chronicle reports that Ludwin has actually spoken with Twitter about the project and had their blessing, especially given that Twitter’s API allows developers to add or remove followers from a user’s account, making the temporary mass following possible.

The tool/game/service is free and the company says they have no plans to monetize the site and through the API, they simply follow and unfollow the daily winner on your behalf, and as the site grows in number, they seek to be as big as or bigger than Lady Gaga, giving each daily winner a taste of the glory, as daily winners have a Fame logo on their avatar for the day to set them apart from others.

The game is just like a good ol’ fashioned raffle where you get one entry, but in the case of Fame, you earn more entries by inviting friends to join Fame. Anyone can unfollow the current winner if they dislike them, or manually follow them after their 24 hours are up if the winner is interesting.

It is hard to criticize a free, fun game that is simply built as someone’s side project, so we’ll start off by noting that this looks fun. Honestly. Imagine potentially having millions of followers for a day – what would you say? My personal Twitter stream would either terrify or bore the average American as I tweet mostly about very specific economic indicators, Ben Bernanke speeches, kittens and unicorns.

Wouldn’t that be fun? And if someone liked my tweets and remembered to go back and follow me the next day after my temporary fame was stripped away, the ecosystem is stroked and new connections are made. Sounds like a win, no?

Why it is terrible, horrible, no good and very bad

First and foremost, unorganic connections no matter how temporary are bogus. In the early days of Twitter, before they knew what they were doing, a simple script would allow users to follow thousands of others based on simple parameters such as words in their profile like “follow back,” thus gaming the system. While Fame is not gaming the system in a permanent way, this really feels like a wet T-shirt contest… a girl gets on stage with a bunch of other girls, bounces around, then the next morning, no one remembers who she is or that she even had a name.

Secondly, any service of any kind that incentivizes people to flood my already overflowing direct message box on Twitter with invitations to join them, it makes me think of FarmVille and I want to hulk out. This part is not Fame’s fault, they’re just trying to spread the word, but trust me, it’s going to get very, very old, very quickly – I predict people will be annoyed before the system hits half a million people.

Thirdly, their FAQ is very clear in that “if the winner is a spammer or bot, we draw again. Only real humans can win FAME!” But what happens when the winner becomes a spammer as soon as they win? Check out the most recent winner below and tell me if you see spam: 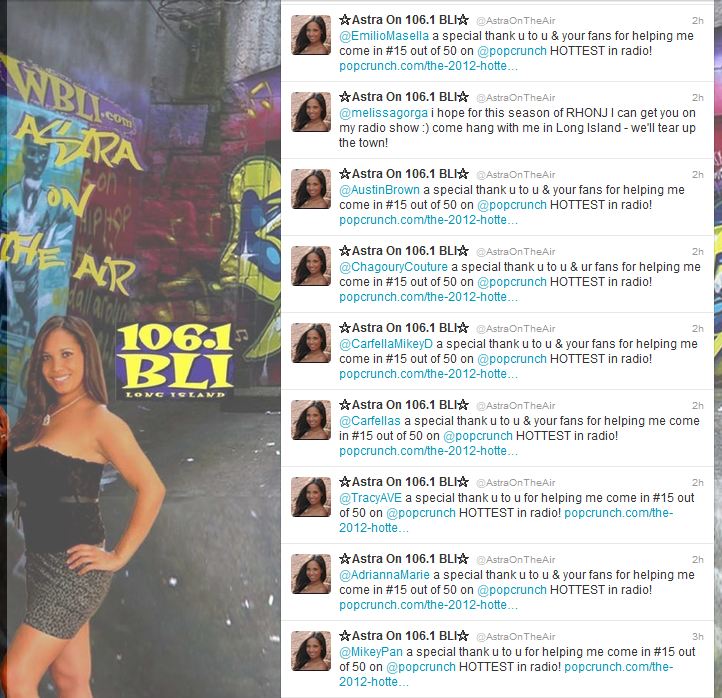 While the person above is a radio DJ and is expected to be somewhat spammy, imagine giving the mic to most teenagers on Twitter (like this kid, found with only 5 seconds of searching for an example on Twitter). Fame says, “If you Tweet anything harmful or abusive we will revoke your win. Examples of harmful or abusive Tweets include links to malicious software, pornography, or hate sites. If you abuse or troll FAME players in any way, we will ban you from playing. We have sole discretion to determine what is harmful or abusive.” This should prove to be a challenge – have you ever given a drunk the mic at a bar? It’s never, ever, ever pretty – nor is an excited college kid with a loud Twitter mic.

Fourth, most people that sign up will not read the permissions, understand the game, or know that to stop playing, they have to contact the company by email. The system is beautifully designed to rope in the cattle, gate them and know that they won’t intuitively understand how to get out. Brilliant, yet kind of inadvertently evil genius (which is actually a compliment, not a real criticism).

Lastly, a daily winner is unlikely to stand out in anyone’s stream that is following more than 20 people. I often hear, “you didn’t see me tweet about my baby taking her first steps?” with that hurt puppy look in their eyes, to which I always say “I follow thousands of people and only log on intermittently throughout the day, I can’t possibly read everything everyone says, it’s not personal.” It sounds mean, but it’s true and I’m in the majority.

All of the criticism aside, it looks like a fun game, but for our readers that are professionals, business owners, entrepreneurs and c-suite level, skip the Fame and build your own, lest you join the ranks of the teen Twitterati. Ludwin’s concept is fun and we know that it will explode in the coming weeks, but for professionals looking to grow their Twitter following, this isn’t on the list of things to do.