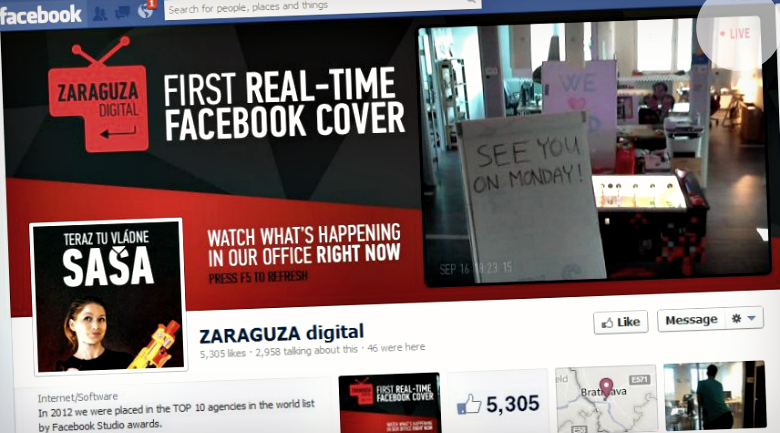 Zaraguza Digital, a Slovakian digital firm, has claimed to have launched the first ever live, updating Facebook cover photo, allowing anyone to see updated webcam videos of their office. They play hangman with fans, and even leave messages for fans, encouraging people to simply refresh the page for a newly updated image.

“In Zaraguza Digital we experimented a bit. Namely with Facebook cover photo feature and a webcam. After a few tweaks, our regular Facebook cover became a real-time Facebook cover. Zaraguza live cover was launched on July 30th 2012.”

Setting the stage for a new trend

Although Zaraguza is one of the best uses around so far, it was not the first to have a live, updating cover photo. They are, however, at the forefront of what will likely become a new trend, giving them and others a way to be interactive in a static environment such as Facebook.

If Zaraguza wasn’t first, who was? French startup, LiveCover! has been in beta for several months now, boasting users like television shows, concert halls, and even a city, mostly marking countdowns and teasers.

Here are a few live, updating Facebook Page cover photos to give you an idea of how the feature is being used. Simply refresh the Facebook Page for a new image:

Now, how do you get in on the trend?

The LiveCover! startup appears to be the first company to formally offer this as a service, which at a cost of a few hundred dollars, will offer a brand a live, updating Facebook page cover photo based on triggers such as hitting a certain number of followers, or a live event going on, or by offering a countdown.

But if you’re the DIY type and want to jimmy rig your own, or you’re a small business on a budget, there are free ways to automate your Facebook Page cover photo to update live, based on a series of functions, for example, you can use IFTTT (“if this, then that”), a startup that acts as the duct tape of the internet (if you’re unfamiliar, get into the details here, it’s worth the two minutes it will take to read).

Through the ridiculously simple IFTTT tool, you can automate your efforts through a few clicks, called “recipes” (think adding a little bit of Instagram as an ingredient to a dash of Facebook Page, and you’ve got a recipe). For example, if you take a photo through Instagram, set your webcam up to upload pictures to Flickr every 30 seconds, then you can connect it to the Facebook Page album for Cover Photos.

We would like to see some of the following uses of live cover photos:

The options really are endless, and we hope your brain is churning with unique ideas for your own brand!

Tip: remember, Facebook has extremely strict rules that are arbitrarily enforced and may result in the permanent and irreversible deletion of your Page, for example, you cannot have any calls to action, be the contact instructions, a “buy now,” or even a “share this,” so make sure you know the rules before investing too much time. Breakdown of rules can be found here.