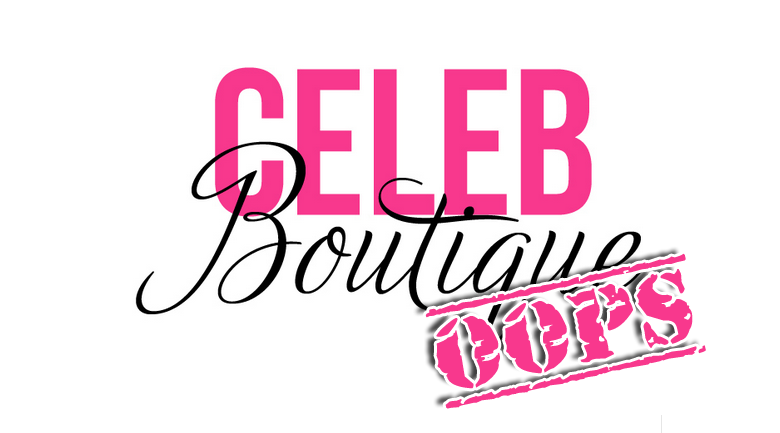 Last night at the Dark Knight Rises movie opening night in Aurora, Colorado, a gunman open fired and killed 12 people, wounding an additional 59 victims, according to Fox News. This tragedy continues to unfold, and all social media outlets are filled with status updates and tweets with thoughts and prayers for the victims and their families.

Focus quickly shifted on Twitter when this afternoon, the Twitter handle for @CelebBoutique, an online boutique that they say is “loved by your fave celebs” and is “your new addiction,” according to their Twitter bio. The administrative contact for the website is in London, so it appears the company may not be in America, and may not be in touch with local events. As details of the Aurora shooting have unfolded, #Aurora has become a trending topic on Twitter.

Not understanding or researching what “#Aurora” pertained to, @CelebBoutique tweeted the following: 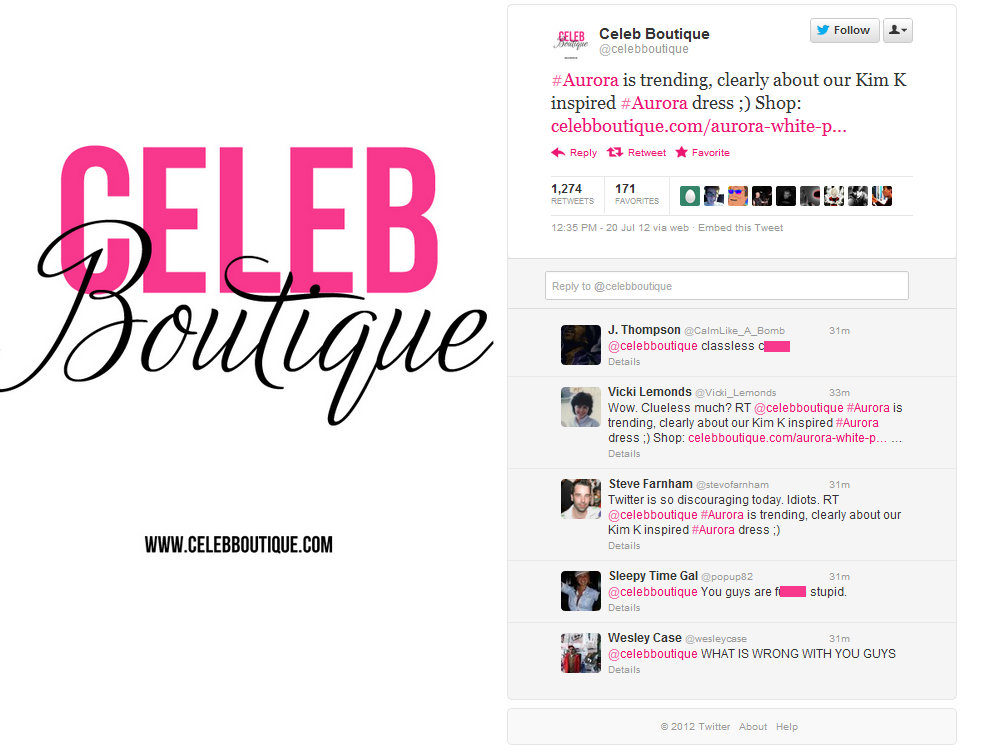 Like wildfire, thousands of people commented on what appeared to be an insensitive tweet (which would not at all be the first time any brand made this exact same mistake):

An hour after the tweet was sent out, the company retweeted @FabmagFashion talking about weekend plans, then deleted the troubling tweet, said on Twitter, “we apologise for our misunderstanding about Aurora,” then, then several minutes later explained, “We didn’t check what the trend was about hence the confusion, again we do apologise.”

Four minutes later, the company said, “We are incredibly sorry for our tweet about Auroroa – our PR is NOT US based and had not checked the reason for the trend, at that time our social media [team/person] was totally UNAWARE of the situation and simply thought it was another trending topic – we have removed the very insensitive tweet and will of course take more care in future to look into what we say in our tweets. Again we do apologise for any offense caused.”

Moments later, they tweeted that “this was not intentional and will not occur again. Our most sincere apologies for both the tweet and situation.”

Amy Vernon, General Manager, Social Marketing at Internet Media Labs told AGBeat, “It’s never OK to latch onto major breaking news to pimp your brand. Even if it’s not on a news event that’s a huge tragedy, that behavior is crass. When it is tragic news, it’s crass, insensitive and moronic. If whoever is running your account isn’t smart enough to understand that, they don’t deserve to be running your account.”

Vernon added, “Celebboutique needs to get out in front of it and apologize and explain that some sort of action has been taken against the person. Yes, everyone makes mistakes and should be able to get second chances, but this is so egregious that the second chance should be cleaning out wastepaper baskets.”

Senior Digital Communications Specialist at 1680 PR, Benson Hendrix said, “Not every hashtag is worth taking advantage of. In a rush to ride the ‘trending topic’ wave it’s been forgotten that people have died, and others are in the hospital after a horrific event. There needs to be empathy for the families of those who are injured or dead.”

As of publication, @CelebBoutique has not responded to a request for comment.

What your brand can learn

Because the company is abroad, they may not be aware that “I’m sorry” tends to be taken as more sincere than “we apologise,” but many have noted that at least the company deleted the tweet rather than blaming a hacker or simply ignoring it. The likelihood is high that the company will be called to make a broader, more public statement, and will probably be pressured into donating to the families in Aurora as penance – as you can tell, the community is up in arms, even though the tweet has been removed.

The unfortunate part is that this misstep could happen to any one of us – trying to be clever or trendy is part of many social media strategies, but if you learn anything today, it is that you should always understand a trending topic and hashtag before you attach your brand to it, because you never know what you’re stepping in.

And when you step in it, you must immediately remove the tweet (ideally, not an hour later), apologize profusely, explain what you will do in the future, and don’t make excuses. @CelebBoutique’s reputation now lies in their own hands, and how much penance they make will determine if they go down in social media history as a flop or a recovery story.