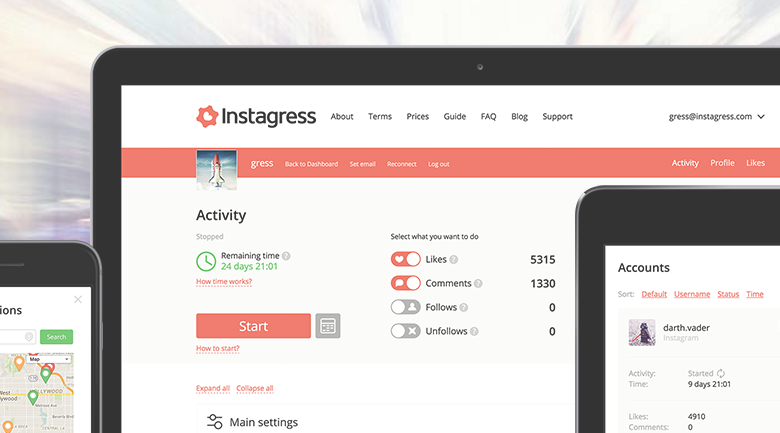 Social media management is important for your brand

For brands, it’s just as important as Facebook, Twitter, and Pinterest in communicating with consumers everywhere, so it came as no surprise when automation for Instagram gained popularity. One in particular is Instagress, an automation site that allows users to automatically like photos, follow people based on location, and schedule posts.

Instagress helps you gain followers without the bots

Instagress claims to be the best instagram automation site, by helping users attract attention to their page. Before, those who wanted to increase account traffic, had the option of buying followers, which ultimately did nothing for likes and comments, since those are typically robot accounts. Now, not only can Instagress increase followers, but likes and comments as well, making a page more visible than before.

In order to begin increasing visibility, users must first create an account and give Instagress permission to access their Instagram. Don’t worry about downloading some unknown file or installing some sketchy software, because Instagress requires neither, making it one of the safer bots around. Once set up, customers have immediate access to some pretty awesome features.

Automate your likes and comments based on #hashtags

First is the option to automate Likes, Comments, or Following, based on specific hashtags and geolocations and other specified Instagram accounts. Automation can be further customized with all of the various control settings, ranging from activity speed (how fast your account works) to auto-stop, which allows users to set limits for when they want automation to stop.

But the best feature, especially for business owners, is their monumental Super-targeting option. With this new option, people can target a relevant audience by following, liking and commenting on the photo or video, of people who follow pages that are similar to yours. Why is that monumental?

Let’s say someone wanted to start a real estate business, instead of finding random people online, Instagress would allow them to select any real estate firm, executive, or agent, and target everyone that follows them, or that they follow. Instead of wasting time trying to find the right people, the people who care about real estate in the first place, Instagress does the hard work for you and puts them at your fingertips.

Can your company afford $.22/day for marketing?

Once the selections have been customized, the only thing left is to press the start button, where it begins to run for the allotted amount of time, tracking the number of likes, comments, follows and unfollows Instagress has done on your behalf. Users can stop automation at any point, and are only charged for the time it spends running.

Uh-Oh, I said “charge”, but don’t panic! Instagress is very affordable, offering users a free three day trial, and six tiers of other price choices. Options range from their most basic package, currently $1.99 for 3 days, which is about $.66 a day, or their maximum package of 360 days for $79.99 of $.22 per day.

For desktop and mobile, but no app — yet

Instagress is pretty awesome, however there are some features I would like for them to add as it further develops. Although they have a mobile site, it would be nice to have an app. Sites similar to this one, also offer automatic photo posting, which would be a nice addition.

Give the three-day trial a shot

All and all this is a very cool site for business owners, and startups alike who don’t have the time to manually increase traffic, but value their brand. See what Instagress can do for your social media branding, and check out their three-day trial. I’ve been using it for a day now, and have gained fifteen followers, and I’m not even selling anything; imagine the possibilities!

In this article:instagram, Instagress, Marketing