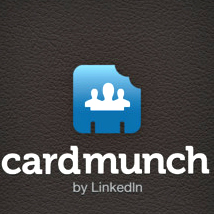 In the last quarter of the year, LinkedIn launched an iPhone app using the CardMunch technology and the announcement was quickly buried as early adopter analysts criticized the app for not allowing contacts to be saved to their iPhone, rather converted the business card data into a LinkedIn connection.

That said, for the business professional who likes the idea of scanning a business card and being sent to a user’s LinkedIn profile, the CrunchMunch app is extremely useful, especially in a professional business networking setting like at a conference. Given that most LinkedIn users also feature their Facebook, Twitter, and blog links, it is an effective point of contact that can make understanding contact’s background easier.

The app has recently been sped up and the number of clicks reduced to three, and it now has flash support for iPhone 4 and 4S, allowing cards to be captured in low-light situations (like at a bar where so many networking events are held). The app allows users to take notes about the person who gave the business card, just like people write on the back of cards for later reference.

We like the idea of having an extremely simple way of scanning cards in that have legitimate context that is quickly accessible. There is no word as to when CardMunch by LinkedIn will be available on Android devices.