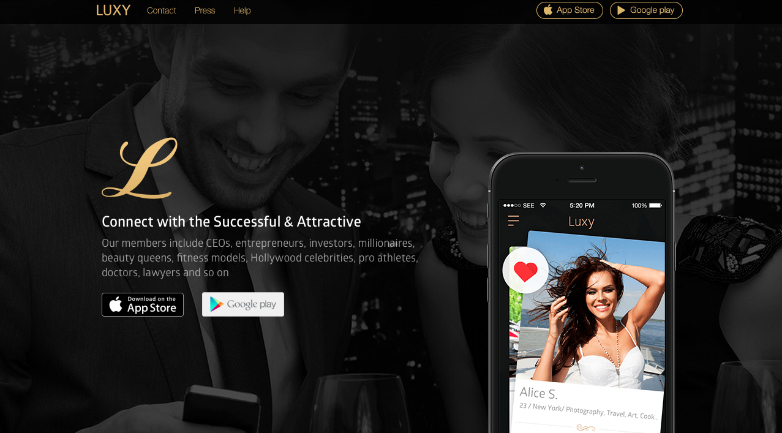 Tinder is a well known “dating” app for people looking to connect quickly, but when you’re a snob, the available candidates may not be to your liking, and you may find yourself spending too much time swiping through rejects.

Enter Luxy, which appears to be like Tinder but for rich people. It says it seeks to connect the “successful and attractive” people like models, millionaires, and even celebrities (although we suspect it would mostly be C-list celebs and down).

Luxy CEO (who remains anonymous through the controversy of this type of app) tells CNN, “With the rise of high-speed digital dating, it’s about time somebody introduced a filter to weed out low-income prospects by neighborhood.”

Although income verification is not part of the app yet, the founders say that’s coming. Currently, users select their favorite luxury brands so they can be matched with potential dates over an affinity for high class living.

The company CEO notes, “If you show up in a 20-year-old VW Bug, and request to meet at McDonald’s, you won’t last very long on Luxy. Look, these members drive the best cars, hang out at the fanciest hotels, live in the biggest houses, wear the best clothes. It doesn’t take long to weed out those who belong on a different kind of dating site.”

Luxy also says they’ll be launching a dating app the only allows people who are not looking to hook up with affluent snobs. Interesting.

So why the trend of separation?

Luxy is raising eyebrows with many scoffing the idea that the world doesn’t need an online country club, that the web creates a level playing field for all.

False. Endless studies have indicated that online behavior imitates offline behavior, particularly in the last decade as we shed anonymity. Social media (and dating apps) has gone mainstream, and the stigma associated with meeting people online has faded.

For this fact, it makes perfect sense for the web to become more and more segmented. There are dating apps for coders, social networks for entrepreneurs, all so that we can filter out people that we’re not looking to connect with, so it’s only logical that “snob apps” will be popping up with popularity.