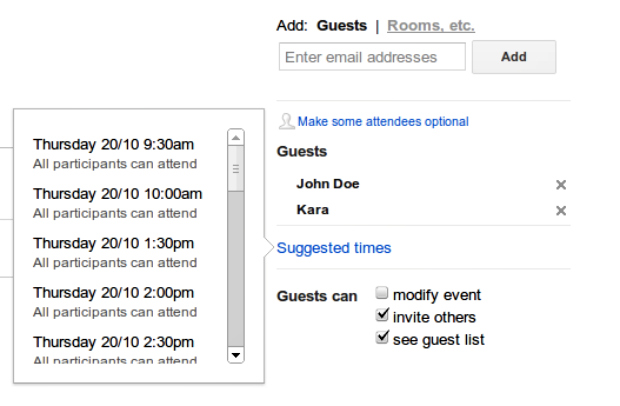 Anyone who has ever tried to arrange a meeting between multiple parties knows that it can feel a lot like tearing your hair out or like chasing rabid cats – it can be tough. There are a lot of third party applications and tools that suggest times and get everyone on the same page, but with the rise of everything Google in recent years, many prefer to use Google Calendar for its ease of use and integration into their other Google products, not to mention native apps on most smartphones that automatically send alerts.

Now, Google has added a new “suggested times” feature to Google Calendar to help people arrange times that work for everyone and since it’s on Google, calendar invitations can go out to attendees which can then automatically put the meeting on their calendar.

Lode Vandevenne, Software Engineer at Google says, “To get started, create a calendar event, add guests and click Suggested times. The resulting list will include upcoming times where all participants are available. For example if you want to create an hour long meeting with Kara, and she already has an hour long meeting at 3pm, then times like 2pm and 4pm will be suggested.”

“As part of our ongoing commitment to accessibility, the list can also be navigated using the arrow keys and is accessible with a screen reader,” Vandevenne added.

In this article:google, google calendar, News