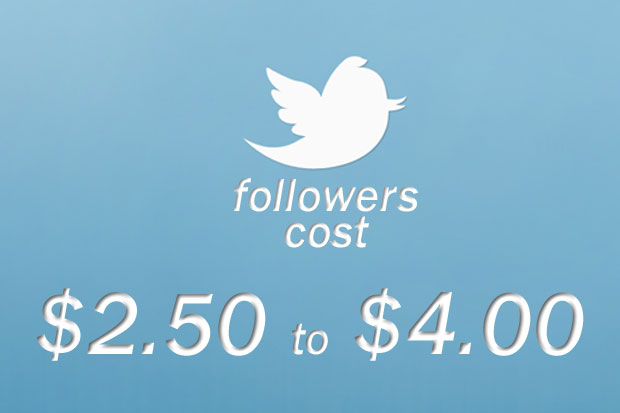 Twitter has a requirement that any advertiser wishing to target Twitter users through their Promoted Products program which costs a minimum of $15,000. Businesses of all sizes are frequently seen through promoted tweets that surface to the top of the Twitter stream, with advertisers buying keywords either locally, nationally or internationally. This is a way for advertisers to reach Twitter users that are not following their brand on Twitter.

According to ClickZ.com, “An email from Twitter sales to prospective advertisers today revealed what brands have been paying for followers on the platform. The memo included cost-per-follower (CPF) rates for Promoted Accounts and cost-per-engagement (CPE) for Promoted Tweets. The CPF runs between $2.50 and $4, while the listed CPE rates come in from $0.75 to $2.50. For CPE, ‘engagement’ refers to clicks, favorites, retweets and ‘@Replies.’”

The email notes that the cost per follower averages between $2.50 and $4.00 each, which is more than double the $1.07 per follower a new study claims it costs to obtain a single Facebook fan. Each has a distinct advertising package with Twitter costing substantially more and offering less user data, while some would argue that because there is less official advertising on Twitter, there is a higher impact because of more dedicated eyeballs.

The social networks are both popular for marketers and consumers alike and the amount it costs to advertise on both are likely to continue increasing as demand for advertising is sustained and more users continue to join each network.