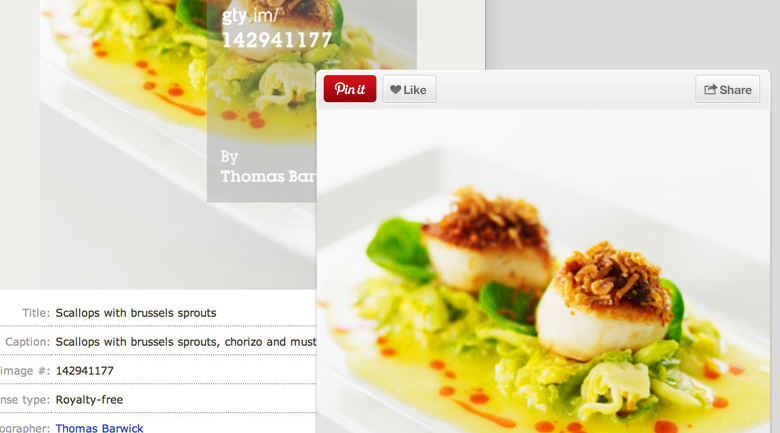 One of the challenges Pinterest users have complained about over the years is “dead end” links, or a lack of relevant results when searching for pins, and the truth is that it isn’t Pinterest’s fault, it’s the community’s fault for posting broken links, images protected under copyright, poor descriptions, categorization, tags, and so forth. Instead of ignoring the problem, Pinterest has partnered with Getty Images to beef up their offering and overcome users’ poor habits automatically.

Read also: Beware the tricks being played on you when using images on your site

The visual bookmarking site acknowledges that the more information is available for a pin, the more valuable it is, so they’ve partnered with Getty Images to provide endless metadata on any image used on Pinterest that happens to be in the Getty database – which is a high chance, given all of the smaller stock photography companies it has acquired in recent years.

Getty says it will be using PicScout (who they recently acquired) image recognition to identify photos on Pinterest as Getty Images, and then, using Getty’s Connect API, it will link those images with the available metadata from Getty’s database, including the photographer, geodata, and more.

A real life example of how it will work

Pinterest explains, “For example, you may stumble across a pin of a delicious dish that strikes you as something you might like to make someday. Unfortunately, if the original pinner uploaded the image and skimped on the description or if the link is broken, we probably couldn’t tell you that it’s scallops with brussels sprouts, chorizo and mustard fondue. Also, if you searched for “scallops with brussels sprouts,” we wouldn’t know that this great image by Getty Images contributor Thomas Barwick is a match. With Getty Images’ help, we hope to be able to make this image more useful and suggest another recipe with scallops and brussels sprouts or healthy scallop recipes.”

Pinterest Product Manager Michael Yamartino notes that as part of the agreement, they will pay Getty Images a fee for the data they share, and make sure their images get proper attribution. “We’re just getting started with Getty Images but we’re excited about the possibilities of what their data can help us deliver,” Yamartino notes.

In a statement, Getty summarized it best, stating, “We’ll get a photo credit for our images on Pinterest’s site and a link back. Pinterest users get more context and have more fun.” Oh yeah, and money.