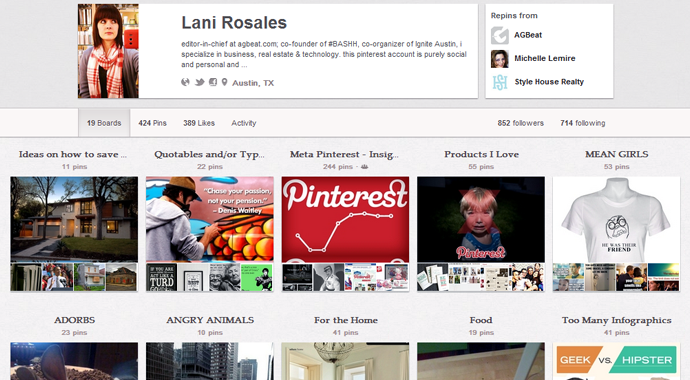 At the recent South by Southwest Interactive conference in Austin, Pinterest CEO Ben Silbermann noted that the visual bookmarking site would soon offer overhauled profile pages, and before many tech geeks finished unpacking after the conference, the company has already rolled out the big changes.

When you click on an individual user, the profile page is now laid out as pictured above, with a larger version of the profile picture displayed which means that many users’ profile pictures are now blurry as they originally used thumbnail images – all users should check to see how their profile picture now lays out, especially brands so as not to overlook a point of first impression.

User bios, number of pins and other stats, social networks and locations are no in the center of the page and the font has been enlarged, which to us silently projects the company’s desire for people to connect with other people, whereas the original design emphasized the visual bookmarks over the actual pinner.

The boards are no longer nine thumbnails, rather a large image of one pin with thumbnails below. Some will enjoy the new layout as it is more reminiscent of the Facebook Timeline design changes, but for two reasons, it is lacking. First, if a pin is of an image that is much wider than taller, the image repeats itself in tile mode which is almost confusing at first glance and can clutter the page. Secondarily, the boards appear less organized and more jumbled, and the fonts don’t render well in Google Chrome. Personally, I like where the design is headed, but it seems rushed and incomplete.

Interestingly, many columnists have stated that this is Pinterest’s first public makeover, which is patently false, as just last month, AGBeat shared with you the makeover that Pinterest sneaked in under the radar.

At the conference, Silbermann also noted that an iPad app will be released soon, which has been a major sticking point for many users who claim the mobile experience on the iPad is sorely lacking at best. The company also notes that they are currently working on an API that would expand the options for those wishing to build on to their offering.